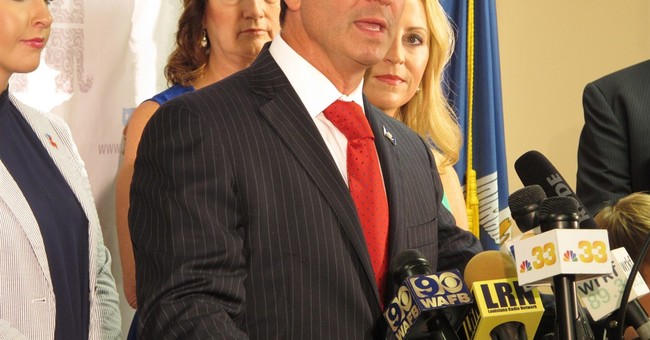 President Joe Biden and his supporters have begun a messaging push that nearly everything is infrastructure in order to sell his $2 trillion infrastructure plan that includes over $100 billion dedicated to green energy projects with an eye toward a net-zero emission economy by 2050.

Louisiana Attorney General Jeff Landry, currently leading a cadre of 12 other states in suing the Biden administration over executive orders on energy production they say circumvents the Outer Continental Shelf Lands Act and the Mineral Leasing Act, intends to fight back against what he sees as “Joe Biden's declared war on America's oil and gas workers."

Landry recently spoke with Townhall about the lawsuit, which targets an executive order Biden signed in January suspending leasing of new oil and gas drilling on federal lands. In a spirited conversation, Landry called Biden’s entire climate plan “hypocritical” because it relies on the purchase of “almost 100 percent of equipment and resources from China.”

“And yet China [has negotiated] hundreds of billions of dollars [worth of] a deal with Iran,” Landry told Townhall. And, he says, the China-Iran deal has nothing to do with clean energy. “They are going there for oil…because China recognizes that to be a superpower, it requires cheap, affordable energy.”

President Joe Biden’s plan to green the economy by 2035 will require cooperation from America’s largest trading partner, which controls a vast share of the minerals used in electric batteries, the cheap materials that make up solar panels and the guts of wind turbines.

China has locked up resources even beyond its borders, buying mining rights in Africa and South America and solar manufacturers in Malaysia. Subsidies and social incentives — including free parking and other privileges for electric vehicle owners — have made it the world’s largest EV market. And while the U.S. fracking boom played out, China was investing in solar.

“China has really put a clear flag in the ground that clean energy is going to be their version of natural gas,” Miranda Ballentine, CEO of the Renewable Energy Buyers Alliance, said in an interview.

Landry’s assessment Biden’s energy plan is rife with hypocrisy is also well served. The Landry and state AG's lawsuit itself contains this gem:

"Executive Order 14008 glistens with irony. It purports to protect the environment but it constitutes what is likely the single-largest divestment of revenue for environmental protection projects in American history."

This is because, as Landry notes, some of the funds that result from the leases Biden’s executive order suspends go toward coastal restoration projects and cleanup efforts related to energy production. He expresses his thoughts about Biden’s overall plan succinctly in conversation.

“This socialist, fascist Green New Deal is trying to make us believe there’s some utopia in green energy,” he says. ““What is net zero anyway?  What it means is we’ll be moving our factories overseas and we’ll be buying our products from China. [It] is itself a lie – it isn’t possible to get to net zero if you want to continue to enjoy the lifestyle you have today.”

Louisiana, among the top energy producers in the U.S., along with the participant states in the lawsuit will certainly suffer unemployment and economic hardship as a result of Biden’s green agenda. And it’s not just conservative legislators who are noticing as the Biden administration is having difficulty convincing even unions the blow to employment is worth the “environmental justice” ideal.

“[These policies] will cripple our job creation and our economic activity down here in the Bayou State,” Landry says. “And what is ‘environmental justice?’  It means making people poorer. The oil and gas industry lifts people out of poverty. When you create electricity, you get clean water and sanitary conditions…I guess we could all disappear off the face of planet to make things better.”