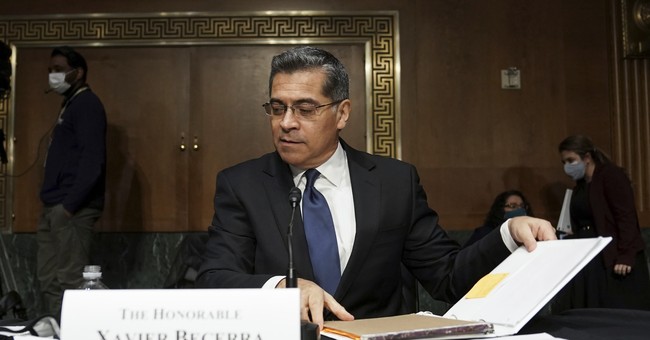 While it’s been hard to get a read on just which direction the Biden administration is heading on any number of foreign or domestic issues, there’s one policy area likely to feel familiar simply because Democrats are headed in the same direction they’ve been going for 12 years, just with a few consequential new moves thrown in. That policy issue is, of course, health care.

There are a few scary new factors in the Democrat approach to health care that come with Joe Biden’s pick to head Health and Human Services (HHS) Xavier Becerra, who seems to have expressed an uncomfortably relativist approach to China in the past. And China, as the entire world knows, has thrust the issue of health care to the front of the crucial policy issue line. According to an interview Becerra gave back in May 2000 to Juan Williams, he favors engagement with China rather than holding them to account.

“I would hope…people believe that the best way to engage, if not an adversary then a reluctant friend, through engagement vs. trying to isolate and punish and send [China] to a corner and say, `Until you act better, you can't join the community of nations’,” Becerra told Williams on NPR’s Talk of the Nation. “I can't see how turning to the old way, the current way, is going to get us any farther…I'd rather try something that gets us closer to treating China as a friend instead of a foe. And I'd rather do that through engagement than isolation.”

Becerra is almost certain to be confirmed.

So that’s a new twist in the Democrat approach to health care. But there’s plenty that’s familiar.

Brian Blase, a former special assistant to President Trump at the National Economic Council, has likened the Democrats “new” approach to health care as little more than an expansion of Obamacare. That’s right, the dreaded Affordable Care Act and its tired pathway to single payer, a failure almost from its inception that keeps turning up like a health care Frankenstein, is back. It was dead but was reanimated by sheer force of will by Democrats who refuse to accept its monstrous nature.

Writing at the New York Post in late February, Blase said the Democrat health care plan – wrapped as it is in the COVID relief legislation team Pelosi has been trying to rush out the door – is, at its heart, a healthcare subsidy for the rich that would widen the income inequality gap.

The massive coronavirus relief bill racing through Congress provides substantial new health-insurance subsidies to upper-income households. A 60-year-old couple with two kids making $200,000 would receive a subsidy of $12,000. In some parts of the country where premiums are high, families with incomes exceeding half a million dollars will qualify for thousands of dollars in subsidies to buy an ObamaCare plan. In contrast, a family of four making $40,000 receives an added benefit of just $1,600…Once again, the Democrats appear ready to unilaterally pass a law that ratchets up our already unsustainable health-care spending, inflating health-care prices and health-insurance premiums. This time it would also worsen income inequality. Health insurers, who have already reaped large profits from ObamaCare, are fully on board. And taxpayers? Well, at some point the government may run out of other people’s money.

This, as was the case with the first incarnation of Obamacare, is the Democrat plan for a public option – “that allows working-age adults — and not just the elderly — to buy into a public insurance plan…directly from the federal government, likely through the federal marketplace, similar to the existing Affordable Care Act marketplace.”

Thankfully, those who believe government should mitigate its influence over how Americans decide to insure themselves have had plenty of time through years of watching Obamacare fail to come up with better ideas to counter it.

Dean Clancy, Americans For Prosperity’s Senior Health Policy Fellow, has been touting a response to the public option: the personal option, a series of moves individuals could make if Congress helps by expanding telehealth, making more widely available tax-free savings accounts and short-term plans, and freeing up employers to reimburse for employees’ health care costs.

A smarter approach to holding down health care costs, empowering patients, and increasing the number of options people have available is a personal option, not a public option… Congress could give more Americans access to tax-free health savings accounts, which make a person’s health care dollars go further. Lawmakers could make it easier for employers to offer employees health reimbursement arrangements [and for] people who find themselves temporarily unemployed due to the pandemic, Congress could legalize flexible, renewable short-term insurance plans in every state [that] can be used as a bridge for those who need coverage until they land their next job.”

As the country faces the reintroduction of health care policy that’s already a known failure, they can take comfort in the fact that conservatives have gotten better at providing them – and Congress – better options to consider.