Here's Why Gov. Bobby Jindal Discussed Islam During his Speech on Common Core 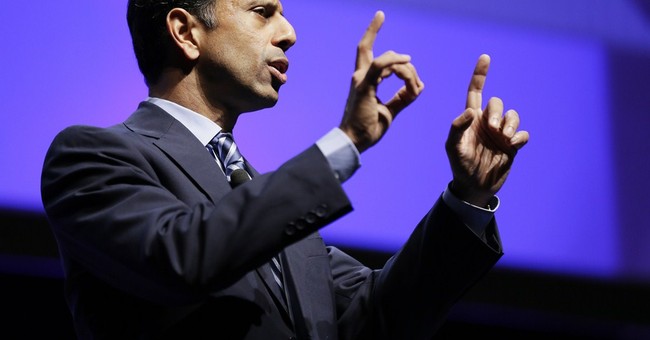 Louisiana Gov. Bobby Jindal (R) is against “the whole hyphenated idea.” From his point of view, there are no Indian-Americans, African-Americans, Italian-Americans, or Irish-Americans; everyone is, just plain and simple, an American. But what would happen if American culture was not being infused into society?

It was along this vein of encouraging cultural assimilation, that the Governor discussed the growing threat of Islamic extremism during his speech at the American Principles Project luncheon on Thursday in Washington D.C.

While denouncing Common Core, Jindal shared how the problems of the state standard initiatives would inevitably leak far beyond the classroom, into the culture. Jindal referenced a speech he gave in London several weeks ago:

“I talked about the fact that Islam has got problems. Not that I believe that a majority of Muslims condone these barbaric acts being done in the name of their religion, but I did say that individual muslim leaders have a responsibility to denounce, not just the acts of violence, but these individuals. To say that they are not going to enjoy a reward in the afterlife, but rather they are going straight to hell for these awful barbaric acts they continue to do; killed teenagers for watching soccer, burned a man alive, killing cartoonists because they don’t like their product.”

Jindal said he went a step further, and called upon leaders of the Western World to also confront their responsibility to encourage a wide range of cultures to come, and to assimilate and integrate into our American society. To teach that America is an exceptional country not because of the inhabitants’ DNA because because of their ideals.

Common Core is an alleged affront to this mission. Only last week, Senator Rand Paul (R-KY) criticized Common Core for teaching "anti-American propaganda, revisionist history that ignores the faith of our Founders."

The history curriculum has been criticized for ignoring key players and documents in history, only to spend time dragging America through the dirt.

According to the National Review:

This movement’s goals are clearly political, and include the promotion of an American foreign policy that eschews the unilateral use of force. The movement to “internationalize” the U.S. History curriculum also seeks to produce a generation of Americans more amendable to working through the United Nations and various left-leaning “non-governmental organizations” (NGOs) on issues like the environment and nuclear proliferation. A willingness to use foreign law to interpret the U.S. Constitution is likewise encouraged.

While America was once commonly referred to as the “great melting pot,” political correctness has tweaked this sentiment, Jindal explained:

"Even when I was in college there was a move to say we are no longer the melting pot, we’re the salad bowl. And the idea behind that is that it’s somehow culturally arrogant. It is somehow a colonial attitude, it is someone racist. To tell people that if you want to come to America, we insist that you come to be Americans."

If DC elitists have control of crafting curriculums with their biased political agendas, Jindal insinuated that the fabric of the country faces the danger of being unwound. Educators cannot be afraid to teach English and to encourage their pupils to adopt the American values which have helped this nation flourish.