Gov. Brewer Vetoes Religious Freedom Bill: It 'Does Not Address a Specific and Present Concern' 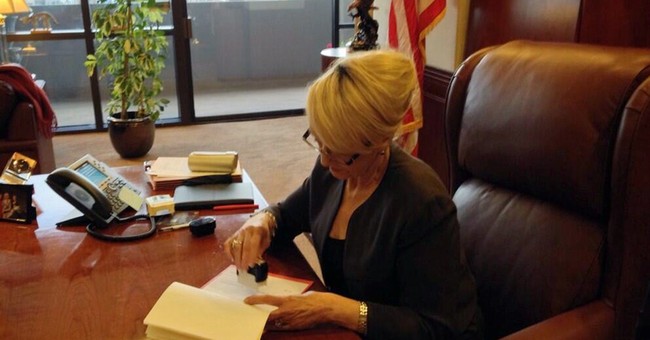 Arizona Governor Jan Brewer (R) has vetoed a bill that would have provided business owners legal grounds to deny service to the LGBT community when it collided with their sincere religious beliefs. Senate Bill 1062 amended the state Religious Freedom Restoration Act to clarify that it extended to “any individual, association, partnership, corporation, church, religious assembly or institution or other business organization.”

Opponents of the legislation said it sanctioned discrimination. The New York Times dubbed it "A License to Discriminate:"

This measure raises serious equal protection concerns and sends the abhorrent message that respecting the civil rights of all people interferes with religious freedom.

“Our diverse nation functions on the notion of shared public space where people are free to hold their religious beliefs,” said Evan Wolfson of Freedom to Marry, a marriage equality group. But that ideal is damaged if businesses are allowed to “turn away parts of the public from stores, restaurants, hotels, jobs and housing,” he explained.

Brewer explained her reasoning for vetoing the bill in a statement Wednesday:

The concerns raised by the proponents of this bill are not unfounded. As a result of actions taken by the Obama Administration, as well as some federal and out-of-state courts, I am increasingly concerned about government's encroachment upon our religious freedoms....

Senate Bill 1062, however, does not seek to address a specific and present concern related to Arizona businesses. The out-of-state examples cited by proponents of the bill, while concerning, are issues not currently existing in Arizona. Furthermore, the bill is broadly worded and could result in unintended and negative consequences. The legislation seeks to protect businesses, yet the business community overwhelmingly opposes the law. Moreover, some legislatures that voted for the bill have reconsidered their votes and now do not want this legislation to become law.

The out-of-state-examples she referred to include New Mexico photographer Elaine Huguenin, who was fined $6,000 for denying to use her artistic ability to capture the ceremony of a single-gender couple.

"Going forward, let’s turn the ugliness of the debate over Senate Bill 1062 into a renewed search for greater respect and understanding among ALL Arizonans and Americans," Brewer remarked before the media.

This is already a concern across the nation. It is only a matter of time before cases like those in New Mexico occur in Arizona. As Ryan T. Anderson of the Heritage Foundation noted:

Freedom is a two way street. And it requires allowing others to do or not do things that we might choose differently for ourselves.

Let's hope State Legislatures are not discouraged by this unfortunate decision and continue to fight for the liberty and First Amendment rights of "all" Americans.