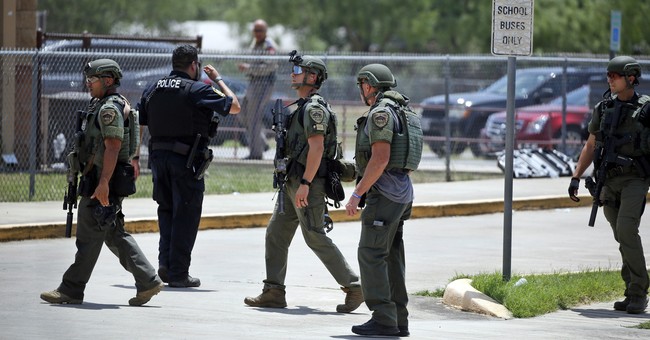 New details continue to emerge after three weeks of the deadly Uvalde massacre that left 19 kids and two adults dead.

According to the San-Antonio Express News, video footage shows that law enforcement allegedly never even attempted to open the door of the elementary school where a gunman barricaded himself in a classroom for 77 minutes while police stood outside.

“Surveillance footage shows that police never tried to open a door to two classrooms at Robb Elementary School in Uvalde in the 77 minutes between the time a gunman entered the rooms and massacred 21 people and officers finally breached the door and killed him,” the paper reported.

There is also reason to believe the door was unlocked to the building, making it easy for law enforcement to enter the school.

“Investigators believe the 18-year-old gunman who killed 19 children and two teachers at the school on May 24 could not have locked the door to the connected classrooms from the inside,” the paper said.

The doors are reportedly designed with an automatic door locking system, which locks the doors once they are closed. According to the source, the police assumed the door was locked.

However, the source says whether the door was locked or unlocked would have made no difference since police “had access the entire time to a ‘halligan’ — a crowbar-like tool that could have opened the door to the classrooms even if it was locked.”

The Daily Mail reports that officers were allegedly fumbling with a set of 20 to 30 keys from a janitor’s large key ring to the doors of nearby classrooms, rather than the one where the shooting was taking place.

Uvalde School District Police Chief Pete Arredondo reportedly spent most of the 77 minutes searching for a master key while the door was allegedly either already unlocked or could have been broken into.

Arredondo reportedly claimed he tested the keys on the classroom doors where the gunman and victims were, however video surveillance shows that he made no attempt at those doors, just classrooms further down the hall.

It wasn’t until Border Patrol agents breached the classroom, killing the shooter.