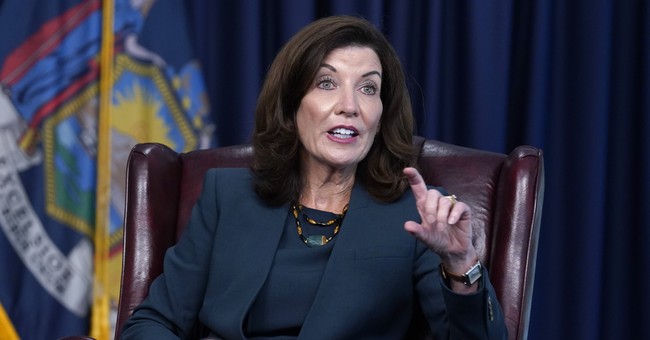 It's hard to find a more extreme example of gerrymandering than the New York congressional map recently signed into law by Gov. Kathy Hochul. The map may even violate a 2014 law enshrined in the state constitution and has thus earned itself a lawsuit, Bernadette Hogan reported for the New York Post.

On Wednesday, I highlighted the map as well as criticism and commentary regarding the absurdly drawn new districts. If the map is allowed to proceed as it is currently drawn up, 22 of the 26 districts will favor Democrats.

Even the Brennan Center criticized the maps for their partisan gerrymandering. Henry Olsen also called for the courts to intervene in an opinion piece for The Washington Post.

New York's #redistricting maps are such a blatant illegal gerrymander that even liberal Brennan Center is horrified by them?? https://t.co/Kaqj6pGEMA

Gov. Hochul approved the map on Thursday night, just hours after it was approved by the state legislature.

According to Hogan's report:

“The Legislature had no authority to enact the new map because the Legislature did not follow the exclusive process for enacting replacement maps that the People enshrined through the 2014 amendments, meaning that the congressional map is entirely void,” wrote the attorneys in the 67-page petition.

“This Court should expeditiously adopt a new map—prior to the impending deadlines for candidates to access the ballot—to cure the malapportionment now affecting the post-2010-census congressional map.”

“If this Court holds that the Legislature somehow had the authority to adopt a replacement map notwithstanding these procedural failures, this Court should reject it as a matter of substance, as the map is an obviously unconstitutional partisan and incumbent-protection gerrymander. If this Court takes this approach, it should invalidate the map and then send it back to the Legislature to create a new congressional map, which complies with the law,” they said.

A source told The Post attorneys are also mulling filing a separate federal lawsuit that would target specific districts, should the state courts deny the challenge.

“The maps just signed into law are unconstitutional partisan gerrymanders that attempt to rig New York elections for the next decade in defiance of the will of the voters and with blatant disregard for New York’s Constitution. These new maps must be struck down,” said the attorneys in a statement.

Reporting from Luis Ferré-Sadurní of The New York Times highlights how some of those involved in the lawsuit include former Republican lawmakers, such as former Rep. John Faso and former State Sen. George Winner.

The most ridiculous district is Rep. Jerry Nadler's, a Democrat who represents the 10th district in New York City. Such a district led the Wall Street Journal editorial board to refer to it as a "Jerrymander."

The Wall Street Journal and the Republican State Leadership Committee (RSLC) addressed how Eric Holder, who now serves as the chairman of the National Democratic Redistricting Committee, has been silent on the map. In addition to providing statements to Townhall, the RSLC has continued to tweet at Holder.

.@EricHolder, what’s the hesitation w/ denouncing the NY Dem-controlled leg for gerrymandering? Oh right, your party is going to lose big this Nov bc of the failed policies they've promoted so you resort to desperate partisan power grabs to win elections.https://t.co/Zuqtz5fQZl

.@EricHolder says he's for “fair maps” but has said nothing about the Democrat-led legislature in New York proposing one of the most egregiously gerrymandered maps. Hypocrisy at its finest. https://t.co/YyZrmQEvE3

Kimberley A. Strassel also called out Holder in a separate piece from the Wall Street Journal. "This has cleared the field for blue states to gerrymander the bejeesus out of their maps. New York's map (which even the senior counsel at the left-leaning Brennan Center's Democracy Project called a 'master class' in gerrymandering) will likely allow Democrats to seize four to five of the GOP's current eight seats," she wrote in regards to New York's map.

Both sides have maintained that theirs will prevail. Ferré-Sadurní cited the legal path the maps may have and included a statement from a spokesperson for one of the defendants:

The judge could uphold or reject the maps, and potentially compel Democrats to redraw them — or appoint a special master to do so in a nonpartisan way should the Legislature prove unable to. The decision, if appealed, may eventually wind its way to the Court of Appeals, the state’s highest court.

“We are 100 percent confident that the lines are in compliance with all legal requirements,” said Mike Murphy, a spokesman for Andrea Stewart-Cousins, the Democratic majority leader in the State Senate. “They are a gigantic step forward for fairer representation and reflect the strength and diversity of New York like never before[.]”

Those opposed to the maps have cited the 2014 amendment, which in part declares that districts "shall not be drawn to discourage competition or for the purpose of favoring or disfavoring incumbents or other particular candidates or political parties."

Congressional maps, which are redrawn at least once every ten years, also face lawsuits in Alabama and North Carolina.