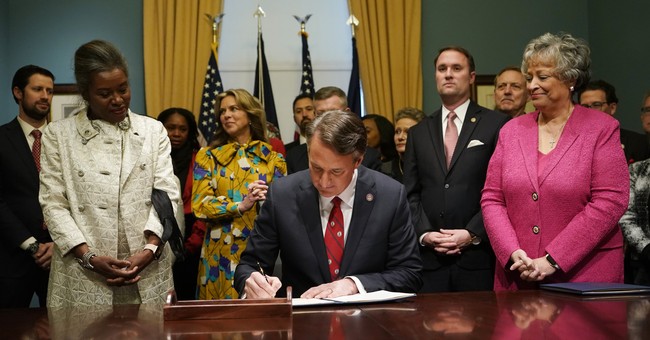 Early into the administration of Gov. Glenn Youngkin (R-VA), leftists went into panic mode, believing that he had eliminated the Diversity, Equity, and Inclusion section of the Governor of Virginia's website. In reality, the website was undergoing a transition from the previous administration of Ralph Northam to Youngkin. The office is still in existence, though it went it went through a bit of a redesign, which entails renaming it. A press release from Wednesday announced that "Governor Youngkin Appoints Chief Diversity, Opportunity & Inclusion Officer." A statement from Youngkin included in the press release noted that he "will introduce and support legislation to change the name of the office to the Diversity, Opportunity and Inclusion Office."

The new officer in question is Angela Sailor, who was most recently with The Heritage Foundation as the vice president of the Feulner Institute there and as chief of staff to Kay Cole James when James was president of Heritage. James announced her resignation from Heritage last March and has since become Secretary of the Commonwealth under the Youngkin administration.

Sailor has vast amounts of experience when it comes to government, public policy, and corporate work, including how it applies to diversity.

Youngkin consistently and vocally opposed CRT during the campaign, while his Democratic opponent, former Gov. Terry McAuliffe (D-VA), dismissed it as a "racist dog whistle" and a "right-wing conspiracy theory." He also denied it was being taught in Virginia, despite how the Virginia Department of Education promoted the concept during his time in office. McAuliffe served from 2014-2018, but the Virginia constitution prevents governors from running for back to back terms.

Not only did Youngkin defeat McAuliffe last November, but among those who considered CRT an important issue, according to a Fox News exit poll, an overwhelming majority voted for Youngkin. According to the poll, 25 percent considered it a top issue, and of those voters, 70 percent voted for Youngkin. Overall, 72 percent of Virginia voters said education was an important issue.

As part of his Day One Promise executive orders, Youngkin last Saturday, upon taking office, signed a series of executive orders, his first being to "restore excellence in education by ending the use of divisive concepts, including Critical Race Theory, in public education."

An executive order about the position also in part notes that "The Chief Diversity, Opportunity & Inclusion Officer will also be responsive to the rights of parents in educational and curricular decision making and ensure, in coordination with the Secretary of Education, that the teaching of Virginia's and the United States' history is honest, objective, and complete"

The executive order's language on the position is noteworthy in other ways though, and triggering for the left, in that it makes positive reference to a constituency that is often overlooked, the unborn.

For the executive order also in part notes that "The Chief Diversity, Opportunity & Inclusion Officer will also work to promote ideas, policies, and practices to eliminate disparities in pre-natal care, and be an ambassador for unborn children."

It's certainly triggered the left.

VA House Dems “Whip” @Lopez4VA Asks: “YOUNGKIN CHANGING THE DUTIES OF VA’s CHIEF DIVERSITY OFFICER TO INCLUDE BEING AN “AMBASSADOR FOR THE UNBORN” is… what?” (Virginia essentially elected Ken Cuccinelli as governor...except his name is Glenn Youngkin) https://t.co/z4bA4KZ48o

Virginia now has a DEI officer encouraged to spout and defend anti-abortion legislation, some of the least inclusive and equitable policy on the books. pic.twitter.com/myOT29VqNr

Youngkin's administration, which already looks to be pro-life, follows the pro-abortion administrations of Govs. McAuliffe and Northam. McAuliffe had also made the abortion issue a heavy component of his campaign last year, signifying that his second term would have been considerably pro-abortion.

On Friday, Gov. Youngkin tweeted words of encouragement for those participating in the March for Life.

I stand with the thousands in attendance at the 49th @March_for_life!

I proudly stand up for the unborn and their mothers. #WhyWeMarch

Share this on Facebook
Tweet
Bill Maher's Take on the Supreme Court and Abortion Will Probably Shock You
Matt Vespa
What's Interesting About the Rolling Stone Reporter Who Says Buffalo Shooter Is a 'Mainstream Republican'
Matt Vespa
What's With All These Democrats Stroking Out All of a Sudden?
Matt Vespa
Republicans Continue to Draw Contrast Between Democrats, Including with Hispanic Outreach
Rebecca Downs
An Increasing Number of Americans Believe ‘Trans Acceptance’ Has Gone Too Far