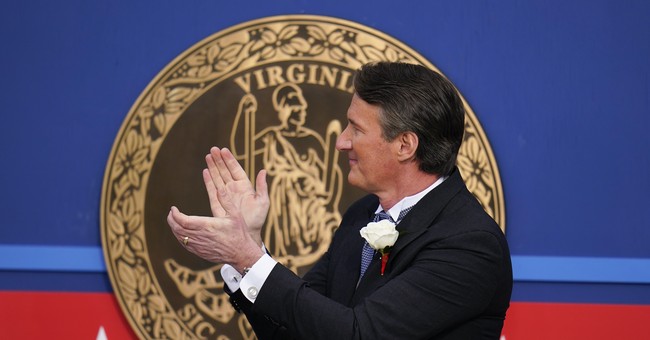 On Saturday, Governor Glenn Youngkin (R-VA) was sworn into office as the first Republican governor of Virginia since Bob McDonnell was elected in 2009. The Republican victory, which extended to Lieutenant Governor Winsome Sears and Jason Miyares, as well as the House of Delegates, was the result of a united effort from many facets of the Republican Party, including the RNC. Chairwoman Ronna McDaniel, who was in attendance for the inauguration, spoke with Townhall about the RNC's efforts and her hopes for commonwealth as a whole for the future.

This began with the very nature of Youngkin's speech, which I referenced when covering the inauguration. A transcript is available from ABC 7News. McDaniel emphasized that "what Youngkin presented for Virginia... the optimism, the hopeful look towards to the future, the unity, is just in such contrast to another speech we heard this week given by the president."

Last Tuesday, President Joe Biden appeared in Atlanta to speak about so-called voting rights, where he compared Republicans to segregationists like Bull Connor and George Wallace and President of the Confederacy Jefferson Davis. Even fellow Democrats called him out for it.

McDaniel categorized Biden's speech as being "about division, about calling out Republicans, Americans, people who have concerns about ID laws, calling them horrific names, demonizing them. You look at Youngkin and you said 'okay, we just saw a statesman today and then we saw a president who diminished the office this week.'"

Besides the tone, McDaniel offered that Youngkin's speech had "a lot of meat in his policy," including on issues that McDaniel reminded "he talked about before he was elected."

Youngkin went on to sign a series of executive orders and directives that had to do with a "Day One Promise," including and especially to do with education, from investigating the Loudoun County School Board for the cover-up of rapes occurring in the district and banning Critical Race Theory (CRT), to rescinding mask mandates in school and vaccine mandates for state employees.

When asked what Youngkin taking office means for the future, the chairwoman expressed high hopes, while also acknowledging that Virginia went for Biden by 10-points.

However, as McDaniel offered, "this is the time where if we govern well, we can shift Virginia back into the red column." She clarified she does mean Virginia voting for a Republican presidential candidate in 2024, as well as the Senate seat, when Democrat Tim Kaine will be up for re-election. "Everything's on the table," McDaniel declared.

"Having this governor in this moment at this time, and seeing not just him," but Lieutenant Governor Winsome Sears as the first woman and first Black woman to hold the position in Virginia and Attorney General Jason Miyares, the first Latino to hold statewide position in Virginia, matters significantly. "The diversity we saw with this election, and then the enthusiasm we've already seen from voters, I think it bodes well for Republicans," McDaniel offered, even speaking of "a foothold in Virginia."

As the memo from November noted and McDaniel affirmed, the RNC had a heavy presence in state elections across the country from last November. "The RNC does it all," McDaniel shared. "We're the ground game," including and especially in Virginia.

The RNC was heavily involved in the Virginia races, to the point of a multi-million dollar investment with over 120 staff, 13 victory offices, and 7.5 million voter contacts there. The Virginia field team also broke voter contact  records when it comes to GOP margins and voter turnouts.

During Youngkin's inauguration, the RNC issued a release noting that Youngkin "received more votes than any statewide office holder in Virginia history, winning Hispanics and Latinos by a 55-44 margin and receiving 13 percent of the Black vote in Virginia."

On the ground teams were able to identify and reach 100,000 voters who don't normally vote in these off-year elections, targeting them and turning out, with McDaniel sharing "that is the type of thing the RNC does when we invest."

McDaniel also referenced plans for "an election integrity model that we've never seen before, unprecedented, that the RNC will replicate in states across the country."

Youngkin had also made election integrity a major priority during his campaign, as far as back as the primary.

McDaniel confirmed that that's "certainly what a lot of our voters are interested in."

Not only did the RNC indeed have "a robust poll watching operation," involving 50 election integrity trainings with over 3,200 attendees, but such an operation produced results. In the 37 target Virginia counties, poll watchers covered 100 percent of polling locations, the November memo confirmed.

There's no rest for Virginia voters, when it comes to elections. In addition to federal Congressional races for this year, state Senators are up for re-election in 2023. "Especially when they overlap, we're going to have a presence in Virginia," McDaniel assured.