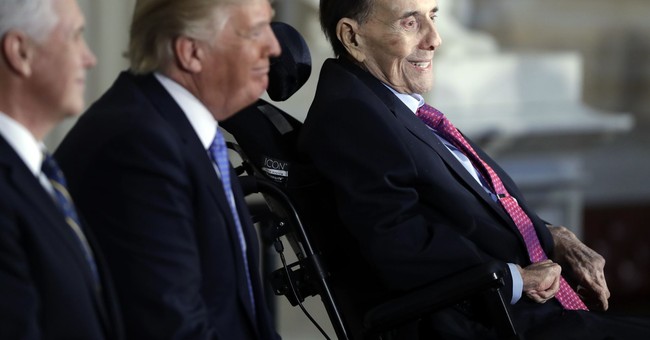 On Sunday morning, the Elizabeth Dole Foundation announced that Bob Dole had died in his sleep. He was 98 years old. He had announced in February that he was diagnosed with lung cancer and undergoing treatment.

It is with heavy hearts we announce that Senator Robert Joseph Dole died early this morning in his sleep. At his death, at age 98, he had served the United States of America faithfully for 79 years. More information coming soon. #RememberingBobDole pic.twitter.com/57NtGfqtmL

Dole's political career spanned several positions, from the Kansas House of Representatives to the U.S. House of Representatives and U.S. Senate. He's perhaps most known for serving in the Senate from 1969 until 1996 and being chosen as minority or majority leader from 1985 until 1996. He left the Senate to run for president against President Bill Clinton, though he ultimately lost.

He also was President Gerald Ford's running mate for the 1976 election, though Ford lost to President Jimmy Carter.

As the tweet from the Elizabeth Dole Foundation references, Dole served for 79 years. This does not merely include public office, but in the military as well.

In news about Dole's death, The New York Times has provided a digitized copy of an article by Katharine Q. Seelye from April 14, 1996, about how "War Wounds Shape Life, and Politics, for Dole."

While he was serving in World War II, an artillery shell exploded, permanently crippling him.

A lengthy obituary from The New York Times by Seelye details how close Dole was with various Republican figures. He was not only Ford's running mate, he was also the Republican chairman during President Richard Nixon's presidency. He was particularly close to Nixon, even after he replaced him as Republican chairman.

Dole also was close to President Donald Trump, having endorsed him in 2016. Seelye noted that Dole "was the only previous Republican presidential nominee to appear at the party's convention in Cleveland, where Mr. Trump was nominated."

Flags will be flown at half-staff, as announced by Speaker Nancy Pelosi's Deputy Chief of Staff, Drew Hammill.

Speaker Pelosi has ordered the flags at the U.S. Capitol to be flown at half-staff due to the passing of former Senator Bob Dole.

Dole is survived by his wife, Elizabeth Dole, and his daughter, Robin Dole, whom he had with his first wife, Phyllis Holden Macey.