Biden's Town Hall Did Really Poorly in the Ratings 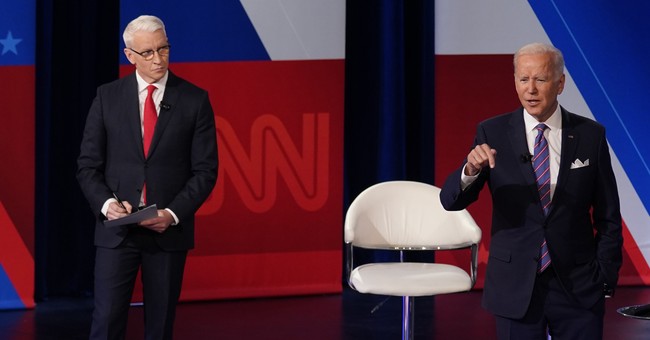 For some reason, the White House thought it would be a good idea to schedule President Joe Biden's town hall when millions of Americans were watching sports, including postseason baseball. Sure enough, the CNN town hall performed terribly in the ratings, according to Joe Concha.

As Concha laid out in his column for The Hill:

According to early numbers from Nielsen Media Research, the Biden town hall from Baltimore, which was moderated by Anderson Cooper, delivered just 1.2 million viewers from 8 p.m. ET to 9:30 p.m. In the younger demographic (25 to 54-year-olds) that advertisers covet most, the commander in chief commanded a paltry 271,000 viewers.

Besides containing tidbits even CNN had to fact-check, the town hall further revealed a lack of willingness from the administration to expand its horizons. As was also highlighted, Biden has done a select amount of interviews an appearances, limited to certain networks. Those the president did take questions from on Thursday were mostly Democrats.

Then that's the most Republicans who have been on air at CNN in a decade. https://t.co/iYRQYPKmbR

Biden not only trailed the competition on Thursday night, but his own previous town halls, and then Republican primary candidate, Donald Trump:

For even more context, Biden drew 3.4 million viewers during his first town hall as president on CNN in February. Thursday night's audience, marking more than a 60 percent drop. For more context, the last town hall Donald Trump did with CNN occurred when he wasn't even the Republican nominee in March 2016, when the first-time candidate captured 3.26 million viewers.