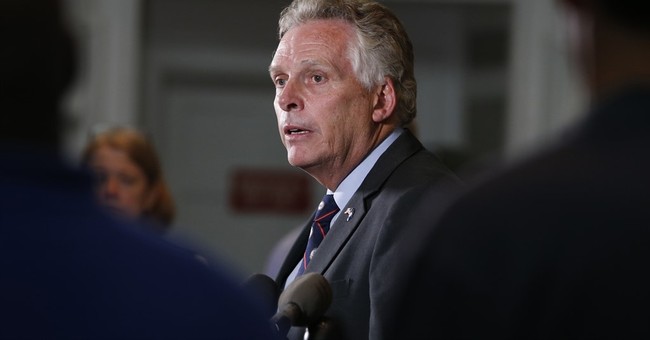 On Thursday, the Republican Party of Virginia (RPV) announced they were filing a lawsuit against the Virginia State Board of Elections (SBE) and the Virginia Department of Elections to get Democratic gubernatorial nominee Terry McAuliffe disqualified from the ballot.

The RPV contends that McAuliffe "filed a Declaration of Candidacy with the SBE without his required signature in violation of Virginia Code § 24.2-520," adding how particularly embarrassing this is considering that McAuliffe has been "a politician of nearly 50 years."

Also from the announcement:

McAuliffe’s Declaration of Candidacy lacks his own signature and contains apparent false statements from two individuals that attested to witnessing McAuliffe sign an unsigned declaration, clearly making the Declaration invalid. Due to these defects, the SBE improperly certified a winner of the party primary that was never entitled to appear on the primary ballot, and therefore McAuliffe is not qualified to be on the general election ballot. The SBE’s acceptance of McAuliffe’s Declaration and its subsequent certification of McAuliffe as the Democratic nominee for the 2021 general election is in violation of Virginia Code §§ 24.2-504 and 24.2-512-538.

The announcement includes a statement from RPV Chairman, Rich Anderson as well:

“Free and fair elections are the cornerstone of our democracy, and Terry McAuliffe’s clear violation of the law severely jeopardizes the integrity of our elections in Virginia,” said Republican Party of Virginia Chairman Rich Anderson. “For decades, Terry has used his political connections and proximity to power to avoid consequences for his reckless behavior and disregard for people and laws, but no amount of political favors and back-slapping can refute the fact that McAuliffe is a fraudulent candidate and cannot be Virginia’s next governor.”

The first day of early voting in Virginia is September 17, 2021, which the complaint addresses when requesting "immediate injunctive relief is appropriate and necessary to protect the RPV, its members, and the voters who associate with it from serious, irreparable harm."

To that effect, the announcement concludes with:

The Republican Party of Virginia is seeking declaratory relief that the Declaration of Candidacy must be declared legally insufficient and McAuliffe must be disqualified from appearing on any general election ballot in accordance with Virginia law. The RPV has further requested injunctive relief that stops the SBE from printing McAuliffe’s name on any ballots for the November 2021 general election.

Not only did McAuliffe not sign the document, but signatures from witnesses portend that they witnessed McAuliffe sign it. The complaint identifies them as Renzo Olivari of Fairfax, who is a Communications staffer for McAuliffe, and Christian Radden of Midlothian.

jesus. we may have a #VAGov write in scenario on our hands. @vaELECT https://t.co/2zPbKGkTIn pic.twitter.com/nLjOm8hTWj