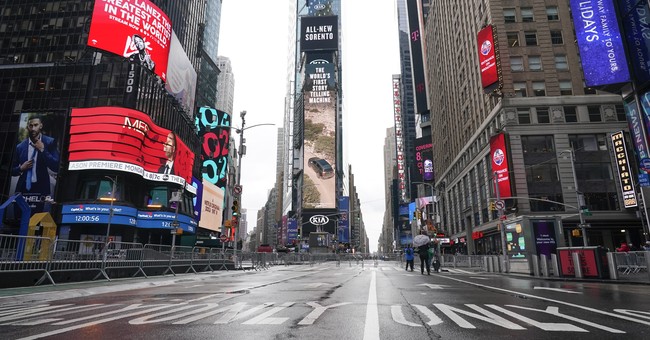 On Friday, Farrakhan Muhammad, 31, was charged with nearly a dozen charges, including attempted murder, after he shot and injured three people during Mother's Day weekend in Times Square. As Julio reported, the three injured, which included a 4-year old, a 23-year old woman, and a 44-year old woman, were not the intended targets. Muhammad's brother was.

As Jordan Williams with The Hill reported:

In an update on Friday shared with The Hill, the New York Police Department (NYPD) said that 31-year-old Farrakhan Muhammad faces nearly a dozen charges in connection with the shooting.

Muhammad was recently extradited from Florida, where he had been with his girlfriend, Kristine Vergara. In an exclusive interview with a Florida local news outlet, Muhammad denied that he was in New York City:

“I left New York a few days ago. I was in [New] Jersey, I went to [New] Jersey, took our two dogs with us. I packed our stuff up,” said Muhammad.

He told us he was evicted from his residence in New York and came here to live with his girlfriend’s family. Our affiliate, WABC reports he appeared to have been staying in Florida with a girlfriend.

Kristine Vergara was arrested with him and according to a spokesperson for the Bradford County Sheriff’s Office, that woman is his girlfriend. She lives in Jacksonville.

“We came out here. Her family says we could stay over here for a few days. So we stayed,” explained the shooting suspect.

NBC New York also noted that Vergara is being charged for harboring a fugitive. While Muhammad had denied he was in New York, Vergara admitted to the police she drove her boyfriend to Florida to evade them. After admitting she knew he was on the run from the NYPD, she was charged with accessory after the fact to second-degree murder.

According to The New York Post, Muhammad had been arrested nine times since 2007, though not all outcomes were known.

Fortunately, all three of the females injured survived. Julio included in his reporting a video of Officer Alyssa Vogul, hailed as a hero, carrying the 4-year old to an ambulance.

Whether they’re rushing toward the danger to help save a little girl or rushing home to family after their tour this #MothersDay — the dedication of NY’s Finest knows no bounds.
pic.twitter.com/fMM384Mb7O