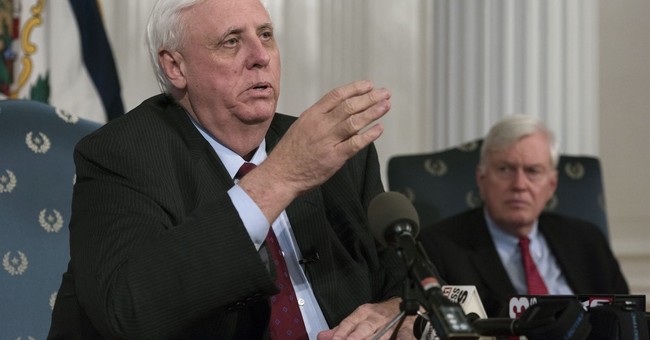 This week, Gov. Jim Justice (R-WV) signed laws which will protect young women from having to compete against biological men in sports, as well as unborn babies and their mothers who change their mind after starting the process for a chemical abortion.

The governor "proudly" put his signature to a law to do with the former issue on Wednesday, as John Raby reported for AP, writing "West Virginia transgender athlete bill signed by governor." Raby noted that the state Senate "had added the college component, before being overwhelmingly approved in the House of Delegates."

West Virginia faces potential retaliation from the NCAA which could refuse to hold tournaments in the state over such a law. Raby mentioned that the organization has indeed been lobbied to do just that. However, he also included comments from Gov. Justice. "It concerns me that we may miss out on a really important sporting event or something like that that could come to West Virginia," the governor said. "However, I think the benefits of it way outweigh the bad part of it."

Earlier this month, Ryan Quinn for the Charleston Gazette-Mail explained that explained that "The West Virginia Senate approved [April 6] expanding to colleges the bill banning transgender middle- and high-school girls and women from playing on women’s sports teams."

PBS News Hour reported on Tuesday that "No major backlash for states passing anti-transgender laws." The piece included statements galore from persons affiliated with organizations vehemently opposed to such legislation, but none in favor. It also engaged in a fallacy by mentioning how:

[Such legislation] is a striking contrast to the fate of North Carolina a few years ago. When its Legislature passed a bill in March 2016 limiting which public restrooms transgender people could use, there was a swift and powerful backlash. The NBA and NCAA relocated events; some companies scrapped expansion plans. By March 2017, the bill’s bathroom provisions were repealed.

Recall that PBS also covered its misleading poll to claim that "New poll shows Americans overwhelmingly oppose anti-transgender laws." I analyzed such reporting and that poll, in part by comparing this poll to others.

The governor also signed the "The Second Chances at Life Act," which Mary Anne Buchanan pointed out received bipartisan support in writing for LifeNews.com.

The new bill, the latest in a series of pro-life success stories in West Virginia, will  require (1) the girl/woman be informed that if she changes her mind, she may be able to save her baby with the help of medical professionals; and( 2) it provides her the ability to act by informing her of the existence of a list of medical professionals versed in abortion pill reversal protocol on the existing West Virginia Department of Health and Human Resources Women’s Right to Know website.

According to Lead Sponsor Delegate Kayla Kessinger, the bill will be effective 60 days from passage.

“I am pleased that other states are joining this effort to give a second chance to those girls and women who change their minds. Women deserve full information when making this life changing decision,” said Karen Cross, West Virginians for Life Political Liaison.

If the woman changes her mind after taking the first pill, Mifepristone, to start the chemical abortion process, she can be given progesterone in an attempt of a reversal. Such efforts are largely spearheaded by the Abortion Pill Rescue Network, a project of Heartbeat International, one of the largest and oldest organizations which is a series of pregnancy center networks to assist women in their pregnancies.

A chemical abortion involves a series of pills. In addition to Mifepristone to cut off nutrients from her unborn child, a woman takes Misoprostol, a day or two later, to complete the process, which causes her to expel that dead child. As I covered in a previous article to do with the FDA repealing regulations of this method, which Reagan had reported on:

Not shockingly, this method is particularly dangerous. It carries with it four times the complications of surgical abortions. Incomplete abortions happen 5 percent of the time, with some studies finding 10 percent of women facing incomplete abortions at 9-weeks gestation. This can lead to death from infection if remaining fetal parts or tissue are not properly removed.

Side-effects and risk associated with this method include abdominal pain, nausea, vomiting, diarrhea, weakness, fever/chills, and headaches. The bleeding may last for weeks after the abortion.

Jon Schweppe, the director of government affairs at the American Principles Project weighed in on these recently passed laws for Townhall. He pointed out that it is:

"Fantastic news for West Virginians who care about life and protecting opportunities for women and girls. When Gov. DeSantis signs the bill in Florida, which he indicated he would do last night on Fox News, we will be up to a total of seven states now that have passed women’s sports legislation into law."