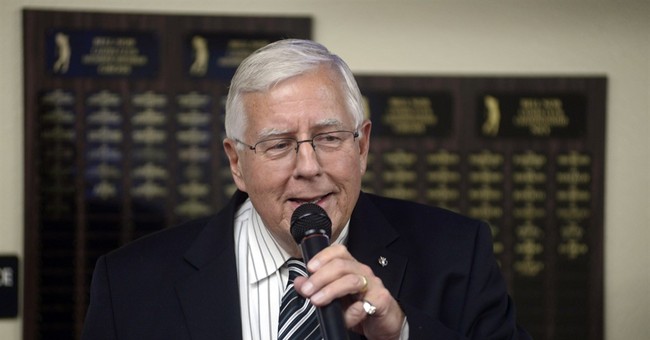 Former Wyoming Senator Mike Enzi (R-WY) passed away on Monday night, at age 77, after a serious bicycle accident. Enzi retired from the Senate at the end of last year.

The former Budget Committee Chairman’s death was mourned by both Republicans and Democrats.

My condolences are with his beloved wife of more than 50 years, Diana, and his entire family. See my full statement mourning his loss: https://t.co/H0Bl2U9u4p pic.twitter.com/2vqHUuyLmc

The nation will remember Mike Enzi as a man of integrity and character. We would all do well to follow his example of treating others with respect and dignity. Ann and I share our profound condolences and sincere prayers for his family and loved ones.

Former Wyoming U.S. Senator & my good friend Mike Enzi died last night after a bike accident. Mike was a kind, kind person. He helped me pass one of my first bills when I was a brand new senator. His faith & his love for Diana & his family knew no bounds. We will all miss Mike ??

Wyoming and the nation have lost one of the most consequential public servants of our time. Whether he was serving as mayor of Gillette, in the Wyoming Legislature, or in the U.S. Senate, you could not have asked for a stronger champion for Wyoming and our country than Mike Enzi. pic.twitter.com/ldgc1sNUxk

This weekend, we received news that our friend and former colleague Sen. Mike Enzi was involved in a serious accident while riding his bike. I know members on both sides are very much thinking of Mike at this time. We are praying for his health and for the entire Enzi family.

My deepest condolences to Senator Mike Enzi’s family. Mike was a devoted colleague and friend, and I’m praying for his loved ones during this difficult time. https://t.co/226XdcPIWa

Wyoming Republican Senator John Barrasso on the death of former WY GOP Senator Mike Enzi: "Wyoming and the nation have lost one of the most consequential public servants of our time." pic.twitter.com/7OBOyKRNhf

Mike Enzi was a colleague, friend, and champion for the people of Wyoming. I enjoyed spending time with him during many Wednesday mornings at the Senate Prayer breakfast. I am very saddened to hear of his passing, and I am praying for his family.

After retiring in 2020, Enzi was replaced by GOP Senator Cynthia Lummis (R-WY).