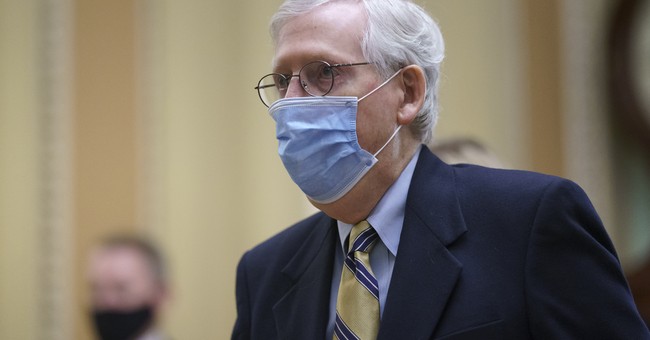 Senate Minority Leader Mitch McConnell (R-KY) weighed in on President Joe Biden’s address to a Joint Session of Congress that is set for Wednesday night. Ahead of a speech from the president who claims to own the "moderate" ideological lane, McConnell said that Biden is thus far governing as if he "owes everything" to the far-left.

Sen. Mitch McConnell: "The president campaigned suggesting he wouldn't owe the far left anything. But he's choosing to govern like he owes them everything." pic.twitter.com/LI4SedhpRV

McConnell noted on Wednesday that Biden campaigned on “unity,” along with a “return to normalcy,” but that his actions in his first 100 days in office do not reflect that message.

“Over a few short months, the Biden administration seems to have given up on selling actual 'unity' in favor of catnip for their liberal base, covered with a hefty coat of false advertising,” McConnell said on Wednesday morning.

McConnell: "Tonight, President Biden will deliver his 1st address to a joint session of Congress. I'll be there, and like my fellow Kentuckians watching at home, I'll be curious to hear how the President tries to square his rhetoric w/the Admin's actions over the past 100 days." pic.twitter.com/n5CVzhEOnM

He went on to criticize the “reckless mixed messaging” by the administration, which has helped spearhead the humanitarian and national security crises at the southern border. The White House has refused to take responsibility for the crisis created by Biden's policy changes.

"Yet through it all, the White House’s foremost concern seems to have been to avoid calling this what it is: a crisis."

Biden is set to address the joint session on Wednesday night.