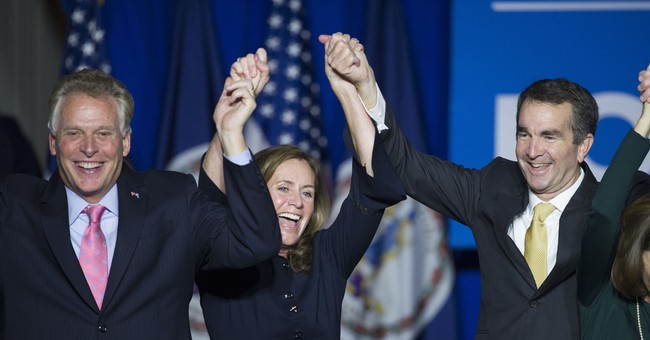 Virginia’s race for governor saw a shake-up on Thursday morning, on the Democrats’ side of the contest. Governor Ralph Northam (D-VA), whose term is soon to expire, endorsed former Governor Terry McAuliffe (D-VA) in the Democratic primary.

Northam’s tenure is stained by his infamously racist scandal, when photos of the governor dressed in blackface resurfaced, which received bipartisan blowback. The governor received calls for his resignation from Republicans and Democrats, including McAuliffe. Now, the likely Democratic nominee is welcoming Northam’s support.

A lot has happened in two years: pic.twitter.com/ySo0DnEdQ9

Republicans vying for the nomination to face McAuliffe took note of the alliance, arguing that McAuliffe would serve another term of Northam’s failed leadership. Pete Snyder, a Virginia small business owner, said that “the fix is in” and that Virginia “cannot afford” a continuation of the “Northam-McAuliffe rule.”

Ok @vademocrats - THE FIX IS IN!

Get a load of this the two “newly minted woke” old white guys make a deal to cling to power for ANOTHER 4YRS - pushing a new generation of Dem leaders aside.

Former Virginia legislator Kirk Cox, also seeking the GOP nomination, had a similar reaction to Northam’s endorsement of his predecessor.

My full statement on Ralph Northam's endorsement of Terry McAuliffe for Governor: pic.twitter.com/h3KjD0PJNK

Northam elected to endorse McAuliffe over his own Lieutenant Governor, Justin Fairfax, who stood by the governor during the racist scandal.