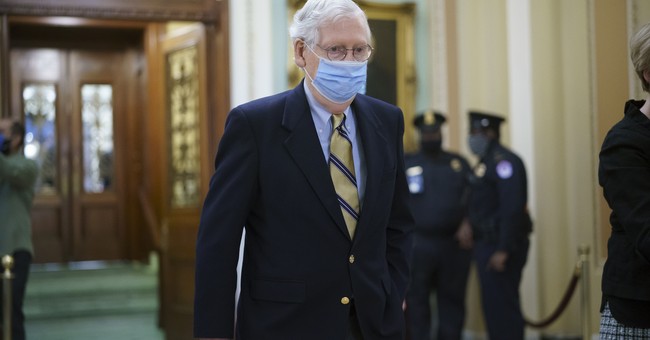 GOP Rep. Mariannette Miller-Meeks (R-IA) won the election by a slim margin, and after two recounts and a certification from the state, Democrats leveraged the House of Representatives as an avenue to overturn the results. Democrat Rita Hart, who lost to Miller-Meeks, insists that legal votes were not accounted for, despite the two separate recounts that occurred.

McConnell reminded Pelosi of her own outrage over Republican opposition to already-certified election results.

“I remember distant days, long ago, way back through the mists of time, when Democrats said it would be wrong for Washington D.C. to overturn a state-certified election result...Two months ago, every Democrat, cable news channel, and liberal newspaper was melting down over some Republicans’ efforts to dispute state-certified election results here in Congress. But right now, as we speak, Speaker Pelosi and Washington Democrats are literally trying to overturn a state-certified election result here in Congress," McConnell said in a blistering floor speech. "The voters of Iowa’s 2nd District spoke in November. Their votes were counted. Then recounted. The outcome was certified. There was the opportunity to present complaints in court, but the defeated Democrat passed it up...Congresswoman Miller-Meeks has been sworn in. She’s here. She’s working. But Democratic leadership is trying to use brute political power to kick her out and replace this Congresswoman with the Democrat whom she defeated. You don’t often see hypocrisy this blatant, this shameless, so quickly."

The House Administration Committee voted, along party lines, to continue on with the review of the already-certified results of the congressional election won by Miller-Meeks. Pelosi did not rule out a scenario in which the duly elected congresswoman would be unseated via a brazen power grab by House Democrats.