Susan Collins Reminds Chuck Schumer of His Failure to Defeat Her 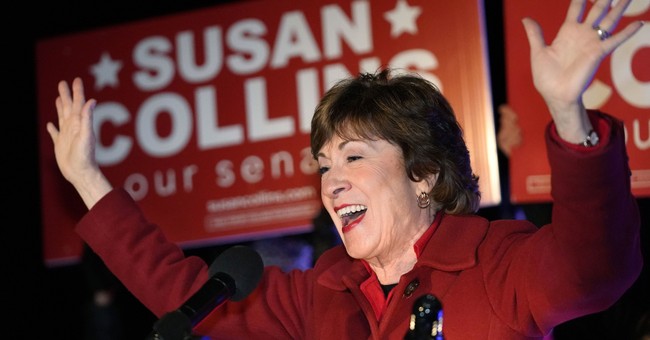 Senate Majority Leader Chuck Schumer (D-NY) took a swing at Senator Susan Collins (R-ME) after the Senate passed Democrats’ coronavirus relief package. Schumer faulted Collins for his party being forced to compromise on unnecessary spending within the legislation, telling CNN that it was a “mistake” to reelect Collins to the upper chamber.

.@AC360 asks if Dems could've done more to win GOP votes like Collins & Murkowski on Covid.@SenSchumer responds: "No. We made a big mistake in 2009 and '10. Susan Collins was part of that mistake. We cut back on the stimulus dramatically and we stayed in recession for 5 years."

Fresh off of a 9-point victory, Collins called Schumer’s comments about her “bizarre,” and reminded him that he tried, and failed, to defeat her. Schumer pumped millions of dollars into Collins’ opponent, as pundits were certain that Democrats would take the seat, only to lose by a substantial margin.

“I think it reflects regrettably, his inability to accept the fact that despite pouring $100 million into defeating me, the people of Maine said: No. And reelected me to a historic 5th term,” Collins said on Wednesday morning.

"I thought that leader Schumer's comments were bizarre. He voted for the same package that I did. President Obama urged me to vote for a stimulus bill that passed that year, and indeed called me afterwards to thank me for my vote..."

Upon winning a 5th term by a resounding margin, Collins criticized the Democratic leader for "disgraceful campaign tactics" and "blatant lies" as he sought to unseat her.

On Inauguration Day 1/20/2021, Susan Collins unloaded on Schumer in a hallway chat with me and @tedbarrettcnn, accused him of "blatant lies" about her record and "disgraceful campaign tactics." She said they hadn't talked since election, predicted a "very difficult relationship." pic.twitter.com/aXcUc0weBx