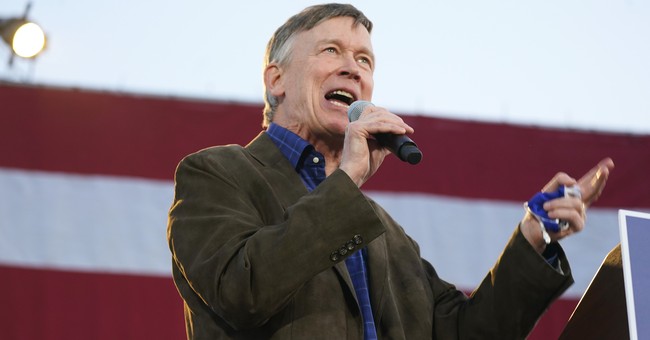 Former Colorado Governor and current Senate candidate John Hickenlooper (D) indicated that he would follow the lead of Senate Minority Leader Chuck Schumer (D-NY) on court packing, if he were to win the state’s battleground Senate race in November.

Hickenlooper said that his ultimate decision on expanding the size of the high court will be contingent on the confirmation of Judge Amy Coney Barrett to the Supreme Court, which is near-certain as Senate Republicans are overwhelmingly united behind her confirmation that is set to occur next Monday.

During his brief bid for the Democratic nomination for president, Hickenlooper said that he would be "open to" the idea of expanding the size of the Supreme Court. In a debate last week with incumbent GOP Senator Cory Gardner, Hickenlooper said that court packing is a "hypothetical," declining to take a firm stance, and instead wrongfully accused Senate Republicans of packing the court by doing their constitutional duty of filling Supreme Court vacancies.

"John Hickenlooper wants to pack the courts in direct opposition to a majority of Americans and a 150-year-old, 9-justice precedent," Colorado GOP Spokesman Joe Jackson told Townhall. "It's shameful that Hickenlooper is choosing to stand with Chuck Schumer over Coloradans."

While the Senate hopeful avoids giving a coherent answer on court packing, Sen. Schumer says that "nothing is off the table" if Democrats take back the majority in the Senate. By contrast, Sen. Gardner publicly opposes the idea of court packing, and challenged Hickenlooper to do the same.