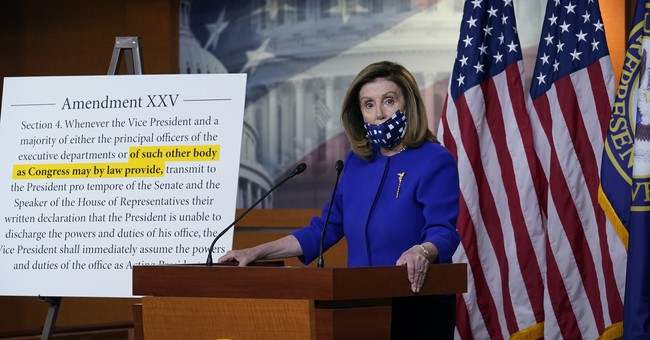 Speaker Pelosi hinted on Thursday that she will be discussing the 25th Amendment. Along with Maryland Congressman Jamie Raskin, the speaker will introduce legislation establishing a congressional commission to evaluate the president’s mental fitness and physical health.

NEW: PELOSI and Rep. RASKIN plan to introduce legislation tomorrow to establish a commission under the 25th Amendment charged with evaluating the president's mental/physical capacity. pic.twitter.com/C8oTqt0Xcx

In introducing the legislation on Friday, Speaker Pelosi said that "a president's fitness for office must be determined by science and facts."

"A president's fitness for office must be determined by science and facts."

Pelosi and Raskin talking about the 25th Amendment and their new bill establishing a congressionally appointed body to review a president’s capability to serve. Raskin notes it’s only to be used “in the most extreme situation” pic.twitter.com/3ShM2M9Bwc

Speaker Pelosi insisted that her legislation is unrelated to the general election, which is now less than one month away:

.@SpeakerPelosi on Democratic legislation on forming a commission on presidential capacity:

"It's not about the election at all...The timing is for now because people want to know...that there is a way to do this." pic.twitter.com/LQm3wG8RsZ

House GOP Leader Kevin McCarthy called the legislation an "obvious political stunt" ahead of the general election. Speaker Pelosi does not have the ability to invoke the 25th Amendment herself.

Here we are 25 days before an election, and she finds time for an absurd political stunt.

Her priorities are misplaced, and she's making the American people suffer the consequences.

White House Press Secretary Kayleigh McEnany said that Speaker Pelosi should look at invoking the 25th Amendment for herself, not for President Trump.

WH's McEnany on Fox on 25th Amdt/Pelosi: It's an absurd proposition from Pelosi. The only one who needs to look at 25th Amendment is Pelosi herself..there's no reason to consider it for the President but maybe for Pelosi

Speaker Pelosi pulls this obvious political stunt less than a month before election day, with no tangible evidence that President Trump's health poses a risk to his ability to carry out the duties of the presidency.