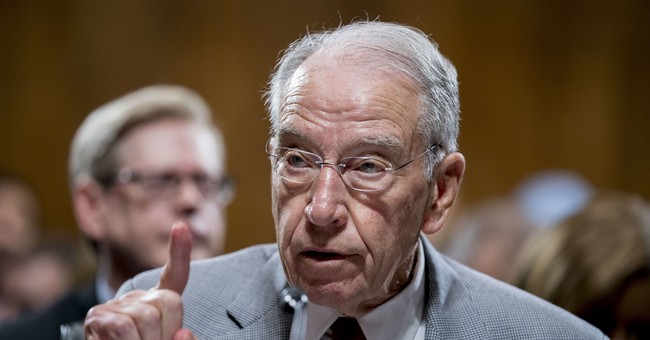 A group of Republican Senators, led by Sen. Chuck Grassley (IA), penned a letter to the Acting Director of U.S. Immigration and Customs Enforcement (ICE) and the Deputy Director of U.S. Citizenship and Immigration Services, requesting information on Ivan Robles Navejas, a Mexican national who allegedly killed four members of the Thin Blue Line Law Enforcement Motorcycle Club. The organization is made up of current and former law enforcement officers.

The Senators detail other alleged instances of Nevejas committing crime, including occurrences of resisting arrest, driving under the influence and aggravated assault. He was protected from deportation in 2013 under the Obama-Biden Deferred Action for Childhood Arrivals (DACA) program, but his status should have expired in 2015. Despite his reported drunk driving charge in 2016, ICE did not deport Nevajas because a DUI was not considered to be a crime that merited deportation during the Obama administration:

“He [Navejas] has faced previous charges including resisting arrest in 2013, driving while intoxicated in 2016, and, most concerning of all, aggravated assault in 2018.2 We are disturbed by the fact that, despite these egregious charges, Mr. Navejas has been permitted to continue residing in the United States, further endangering our citizens,” the lawmakers write. “Furthermore, we were also disturbed to read that Mr. Navejas was shielded from deportation with status granted under the Obama-era Deferred Action for Childhood Arrivals (DACA) program in 2013.3 After his DACA status subsequently expired in 2015, he remained unlawfully present in the United States without consequence and was afforded the opportunity to re-offend.”

The incident that ended in the death of 4 law enforcement officers, who were members of a Texas chapter of the Thin Blue Line Law Enforcement Motorcycle Club, was another instance of Nevajas driving under the influence:

“On July 18, 2020, Mr. Navejas’ multi-year crime spree in the United States tragically culminated in him drunkenly driving his vehicle into a group of motorcyclists riding with the Thin Blue Line Law Enforcement Motorcycle Club in Kerr County, Texas...The four individuals killed included a police sergeant, a retired lieutenant colonel in the U.S. Army, a retired police detective, and a police officer and retired Army officer.”