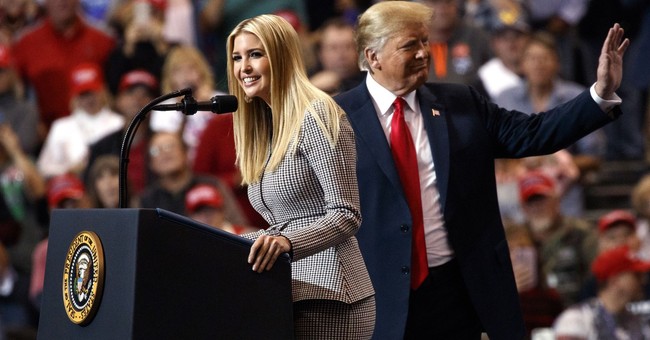 First Daughter and Advisor to President Trump, Ivanka Trump, introduced her father at the conclusion of the Republican National Convention (RNC). Four years after introducing then-candidate Donald Trump, she underscored her father’s accomplishments during his first term in office.

Ivanka Trump: “Tonight I stand before you as the proud daughter of the people’s president. He is our commander-in-chief, champion of the American worker, defender of common sense and our voice for the forgotten men and women of this country.” https://t.co/EyJzJDolZ4 #RNC2020 pic.twitter.com/znq4e9Eg5i

Trump outlined her father’s accomplishments for the American people, including landmark criminal justice reform, job creation, fairer trade deals, global women’s economic empowerment and tax cuts. She pitched her father as the “common-sense” president that transcends traditional partisan ideals and is "unapologetic about his beliefs":

Ivanka Trump says her father is "unapologetic about his beliefs": "I recognize that my dad's communication style is not to everyone's taste and I know that his tweets can feel a bit unfiltered. But the results, the results speak for themselves" pic.twitter.com/MLcx8gi6Y9

She went on to subtly attack Joe Biden as an “empty vessel” and pitch her father as a “warrior”:

“America doesn’t need another empty vessel who will do whatever the media and the fringe of his party demands. Now more than ever, America needs four more years of a warrior in the White House.”