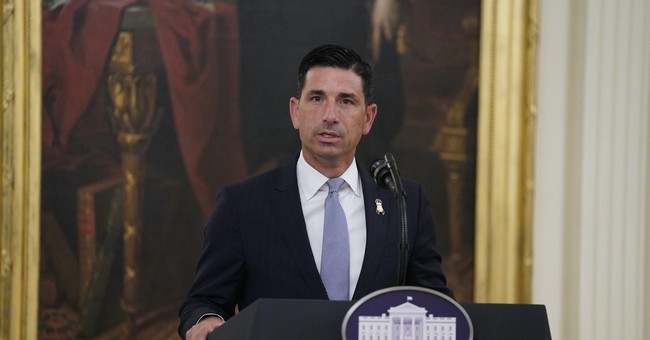 President Trump announced on Tuesday that he will nominate Acting Secretary of the Department of Homeland Security (DHS) Chad Wolf to officially head the department. Wolf has acted as chief of DHS since November of 2019, replacing former acting DHS Secretary Kevin McAleenan, who took over the operations of the department after former DHS Secretary Kristjen Nielsen resigned.

I am pleased to inform the American Public that Acting Secretary Chad Wolf will be nominated to be the Secretary of Homeland Security. Chad has done an outstanding job and we greatly appreciate his service!

Honored to be nominated by @POTUS to lead the men & women of DHS in safeguarding the American people. As the Homeland faces evolving threats from natural disasters, violent opportunists, malign cyber actors & transnational criminal orgs, the mission of DHS is as critical as ever. https://t.co/1NmK8pPnM4

Last week, the Government Accountability Office (GAO) raised questions about Wolf’s ascension to the position of acting secretary, claiming that Wolf was appointed “by reference to an invalid order of succession.”

Wolf has helped the administration navigate the senseless violence that is plaguing American cities, via Operation Legend aimed at combatting crime, and demonstrates zero-tolerance for violent protesters who seek to destroy federal property:

25+ arrests in Portland in the last 48 hrs. Now is the time for the Governor to deploy her National Guard, send in Oregon State Police or request assistance from the federal government. Portland law enforcement is doing what they can but need help to proactively address violence.

President Trump must formally inform the Senate of Acting Secretary Wolf’s nomination to serve in the role permanently, and Wolf will have to be confirmed by the upper chamber.