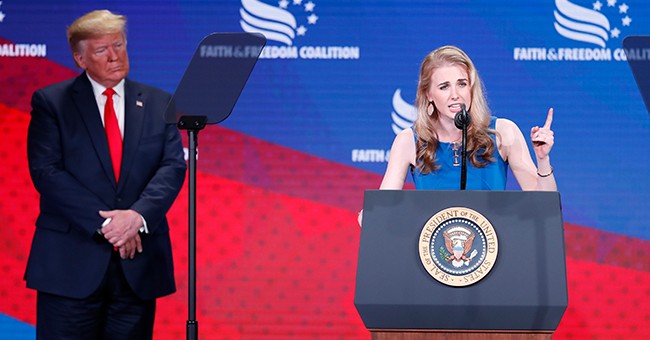 The first night of the Republican National Convention (RNC) featured multiple testimonies from Americans who have tangibly benefited from President Trump’s policies. One was Natalie Harp, of California, whose life was saved by the Right to Try Act that was signed into law by President Trump. The legislation gives patients who are terminally ill the autonomy to try unapproved or experimental treatments.

In the classic Jimmy Stewart film, IT’S A WONDERFUL LIFE, George Bailey is given a great gift—the “chance to see what the world would be like without” him.

At #RNC2020, we’d like to give you that same gift, President @realDonaldTrump!@GOPconvention:pic.twitter.com/C0N0BkH1uY

After making a reference to “It’s a Wonderful Life,” Harp told her story of being diagnosed with a rare form of terminal bone cancer. She hit Democratic opposition to Right to Try, and gave President Trump credit for signing this life-saving legislation into law:

“The Democrats love to talk about healthcare being a human right. But a right to what? Well, I’ll tell you. To them, it’s a right to marijuana, opioids, and the right-to-die with “dignity”—a politically-correct way of saying ‘give up,’ at best, and at worst, assisted suicide. I was told I was a burden to my family and to my country—and that by choosing to die early, I’d actually be saving the lives of others by preserving resources for them rather than wasting them on a lost cause like myself,” she said. “And when I failed the chemotherapies on the market, no one wanted me in their clinical trials—I’d make them look bad. They didn’t give me the right-to-try experimental treatments, Mr. President. You did. And without you, I’d have died waiting for them to be approved.”

Right to Try legislation gives terminal patients the individual autonomy that they deserve, and should be wholly bipartisan, but many Democrats played politics with American lives.