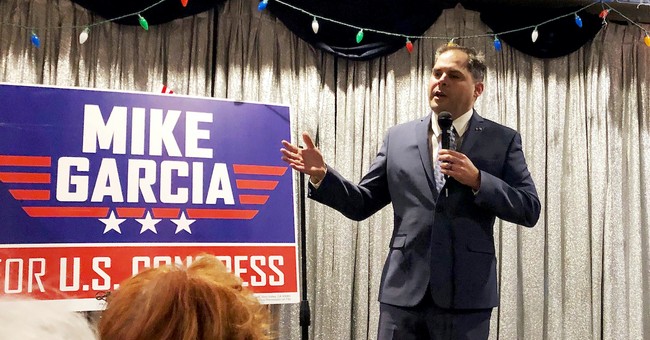 Breaking: Christy Smith (D) has seen enough in #CA25, conceding to Mike Garcia (R). Republicans pick up their first seat in CA since 1998.

Christy Smith has conceded to Mike Garcia in #CA25. Garcia and Smith will face off again in November. pic.twitter.com/y1NIOfVNMb

Garcia's win is decisive for the GOP among Tuesday night's sweep of congressional elections. President Trump and Republican leadership on Capitol Hill congratulated Garcia on a victory that is a blow to Speaker Pelosi and the Democratic Congressional Campaign Committee:

Big Congressional win in California for Mike Garcia, taking back a seat from the Democrats. This is the first time in many years that a California Dem seat has flipped back to a Republican. Also, Tom Tiffany beat his Democrat rival BIG in Wisconsin. Two great Congressional WINS!

Dear Nancy & @dccc,#CA25 is over. Congrats @MikeGarcia2020 on your well-deserved victory. A RED WAVE is coming! pic.twitter.com/fQOyX0d9WA

Original Post: The nationally-watched special election in California’s 25th congressional district ended in a GOP victory on Tuesday night. The race has not been called thus far, but Republican Mike Garcia holds a substantial lead over Democrat Christy Smith in the race for disgraced former Congresswoman Katie Hill's seat.

Leading up to the election, the nonpartisan Cook Political Report deemed the race as a “toss-up.” Garcia's victory would represent the first GOP flip of a congressional seat in California since 1998.

The 25th congressional district was previously a GOP-held seat before Katie Hill flipped it in the Democratic “blue wave” of 20218. Smith, an ally of Hill, was presumed to take the seat.  After Hill’s disgraceful behavior and eventual resignation from Congress, the GOP put the seat on the map.

Garcia currently holds a substantial lead over Smith, with ballots still being counted.

If Mike Garcia (R)'s lead over Christy Smith (D) in #CA25 holds, and chances look pretty good it will, he'll become the only House Republican from a district Hillary Clinton won with more than 50% of the vote.

It would be imprudent to call the race w/o knowing how many ballots are left to count, but the odds of Garcia (R) ultimately winning #CA25 seem pretty high to me right now.

The National Republican Congressional Committee (NRCC) is calling on Smith to concede the election, as Garcia's lead widens:

A Garcia win in this Democratic district will foreshadow the GOP's hopes of taking back the House majority in November, and would sound the alarms for Democrats. Republicans also won a special election in Wisconsin on Tuesday.

Very rough night for @DCCC between CA-25, WI-07, and their primary loss in NE-02. They can spin it all they want, but special elections and primaries matter. Tonight's results will impact the map and resource allocation this fall. https://t.co/q2ZU3ogPtf

Last night’s results took a flamethrower to the Dems' absurd narrative that they have any chance of picking up seats.

Thus far, House Republicans have won every special election this cycle while outperforming their 2018 results in PA-12, NC-09 & CA-25.https://t.co/3yGfddgoDC

This special election represents a referendum on the disgraceful behavior of Katie Hill, and if Garcia manages to flip the seat, a huge win for the GOP.