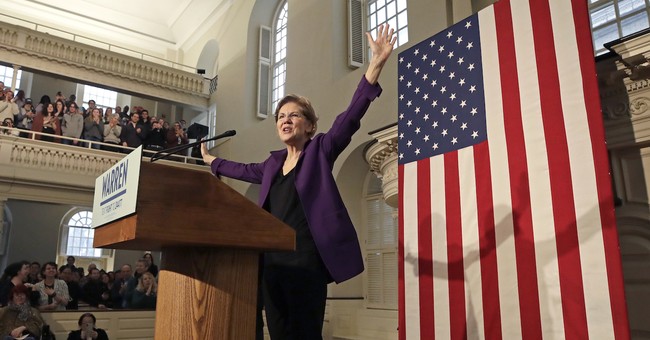 After alleging claims of misogyny at Sen. Bernie Sanders (D-VT) yesterday, and just weeks before the Iowa caucuses, Sen. Elizabeth Warren took to Twitter to release a plan in support of canceling student loan debt. Total student loan debt is nearing 2 trillion dollars. The senator from Massachusetts even said that she would expand her own executive power to cancel the nation’s student debt, without Congress:

I made sure Congress provided $700 million in a relief fund for borrowers who dedicated their lives to public service but missed technical requirements for loan forgiveness, and I fought to cancel loans for 80,000 students who were cheated by Corinthian Colleges.

Understand this: The Department of Education has broad authority to end the student loan debt crisis. When I'm president, I plan to use that authority.

The future of our economy and a generation of student loan borrowers are at risk, and we must use every tool and opportunity we have to help them. We can't let corruption in Washington hold back big, structural change. I’m committed to seeing this fight through—no matter what.

Although Warren still self-identifies as a capitalist, she has swerved into the far-left lane championed by Sen. Bernie Sanders during this presidential primary. Warren’s ideologies have been all over the spectrum, and often depend upon what is popular; Sanders has been much more consistent in the policies he advocates for. The Vermont senator also does not hide his values, nor avoid questions on how social programs would be paid for; even his biggest critics can appreciate his authenticity.

Warren’s updated plan goes further than the bill she co-sponsored in April of 2019, which would have eliminated loan debt for a large majority of borrowers. In conjunction with her presidential campaign, Warren claimed she would fund this plan with her “2 percent” tax, which economists have determined completely unfeasible.

The most concerning part of Sen. Warren’s new plan to combat student debt is her promise to sidestep the authority of Congress; executive power has expanded at a rapid pace, especially over the past three decades, and a president canceling trillions of dollars in debt would not be a great precedent to set. Knowing that she would see this criticism, Warren published a letter signed by three experts at Harvard Law School, who affirm her plan to cancel student debt via executive action to be completely within her presidential power. They refer to the Department of Education’s ability to ‘modify’ loans; if enacted, this broad executive action would certainly face a court challenge on account of separation of powers.

Warren’s release of this new plan, on the morning of a primary debate, is certainly her attempt to make headway with voters in Iowa and New Hampshire; Warren is also likely trying to court voters supporting Sen. Sanders, as her polling numbers continue to fall and Sanders continues to see a surge. This plan also gives Senator Warren the chance to distinguish herself even further from former Vice President Joe Biden and Pete Buttigieg, both of whom have released more modest plans to combat student loan debt.

Share this on Facebook
Tweet
As Expected, the 'Infrastructure' Bill Is Packed with Absurdities
Katie Pavlich
New Report on the Wuhan Lab Details 'Greatest Coverup of All Time'
Katie Pavlich
'Unredacted with Kurt Schlichter': A Sit Down with My Cuban Father-in-Law