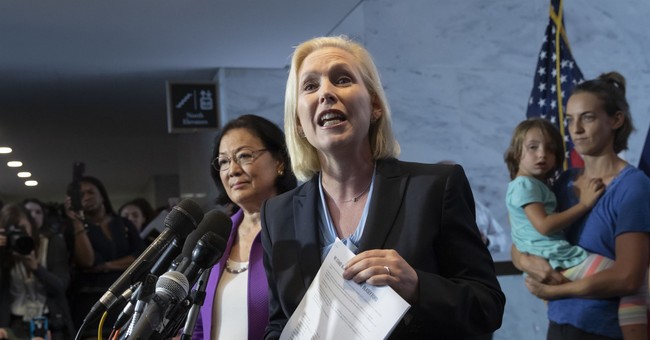 Democratic Senators are flexing their hypocritical muscles more than ever before amidst a vicious smear, which they are cheering on from the sidelines, against Judge Brett Kavanaugh. Unsurprisingly, among the leaders of this hypocrisy are two of the female, 2020 Democratic hopefuls: Senator Kamala Harris (D-CA) and Senator Kirsten Gillibrand (D-NY).

As more oddly-timed, unsubstantiated and uncorroborated allegations surface against Judge Brett Kavanaugh, the duo of left-wing partisans are jumping to conclusions and demanding an FBI investigation into these allegations, which have zero evidentiary support. Dr. Christine Blasey Ford, the first to accuse Judge Kavanaugh, has yet to even testify before the Senate Judiciary Committee, but that holds no merit to Harris and Gillibrand, and their band of left-wing, feminist allies who will stop at nothing to halt Judge Kavanaugh’s nomination to the highest court.

Wore black today in support of all survivors of sexual assault or abuse. We won't let them be silenced or ignored. #BelieveSurvivors pic.twitter.com/immVdGsepx

Amidst this Kavanaugh smear, Harris and Gillibrand, along with other Democratic lawmakers and operatives are throwing around the word ‘credible’ to weigh the merits of sexual assault allegations. Any reasonable person might associate credibility with facts, evidence and corroborating sources, right? Apparently, not. The allegations made against Judge Kavanaugh have no evidentiary support and no corroborating witnesses; in fact, those four others, including a friend of Ford’s, deny or contradict her allegations. The most recent claims, made by Deborah Ramirez and published by Ronan Farrow in The New Yorker, also have zero substantive evidence, and cites witnesses that were not confirmed or corroborated.

Now, allegations of rape and sexual assault are, indeed, difficult to prove, given the nature of the crimes. However, having multiple witnesses and those who attended the party all contradict these allegations is an extremely significant aspect to consider, and certainly knocks the credibility of the allegations. The appropriate thing to do, especially as an elected official, is to give Dr. Ford, and other accusers that may want to, the opportunity to tell their stories. The Senate Republicans, especially Chairman Grassley, did just that; committee leadership bent over backwards to accommodate Dr. Ford in the setting which would allow her the most comfort.

The hypocrisy of Senators Harris and Gillibrand is their selective belief of women who come forward on an ideological basis. The partisan agenda of the two 2020 hopefuls is vitally clear, as they insist that Judge Kavanaugh is automatically guilty, with little evidence to substantiate the allegations, but are conveniently silent on the allegations against Keith Ellison, the Vice-Chair of the Democratic National Committee. Karen Monahan, Ellison’s ex-girlfriend, alleges detailed abuse by Ellison, and includes medical records to support her story.

To Harris and Gillibrand, it seems as though these allegations, with actual evidentiary support, miss the credibility mark, since the 2020 hopefuls have been silent on the claims made against a high-ranking member of the Democratic Party’s leadership. The notion of believing women no matter what is in and of itself problematic, but, if that is the stance Democrats want to take, they should at least be consistent. It is difficult to see how Harris and Gillibrand, along with their left-wing allies, actually believe women across the board, as they claim to, when they cannot take a stand against a member of their own party. This sends the message to women that allegations only have credibility when they are put forth against a powerful, conservative man.

Women, and men, who have survived any form of sexual assault or abuse deserve the opportunity to tell their story, as does every accused party. Our judicial system, which allows for presumed innocence until guilt is proven, is just one aspect of our political system that makes the United States so unique and exceptional. Indeed, allegations should be weighed based on evidence, corroboration and each party’s testimony - not the ideological stance of the accused. Survivors of sexual abuse deserve better than to have their traumatic experiences politicized for the sake of Senate Democrats’ partisan agenda.