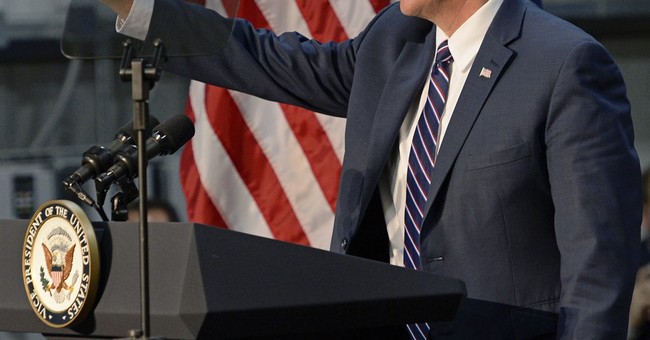 Vice President Mike Pence has delivered a few collegiate commencement addresses since taking office, most famously at Notre Dame. This morning, the vice president addressed graduates of the Naval Academy.

“As you, our youth, are the future, and universities, the bellwether or thought and culture, I would submit that the increasing intolerance and suppression of the time-honored tradition of free expression on our campuses jeopardizes the liberties of every American.”

Participants in and proponents of this stunt called it "free speech," which, of course, is valid, but the greater issue lies in the maturity of these students and the lack of respect they showed for the vice president of the United States. The graduates, who were later booed by their peers and higher powers, of Notre Dame had every right to walk out of Pence’s speech. But, that speaks volumes to their character and to the notion that diversity of thought is a completely lost concept on college campuses. Students on liberal-leaning campuses cannot stand to listen to any speaker that may think differently than they do. One would think that four years of undergraduate education would teach students a bit of tolerance and an urge to be intellectually challenged. Alas, no.

When Vice President Pence addressed the Navy-Marine Corps Memorial Stadium on Friday, he received a staunchly different reaction than that of Notre Dame. He cited the Trump administration’s value for the Armed forces, noting that there would not be military budget cuts under President Trump. Vice President Pence also attested to President Trump’s commitment to American exceptionalism: “(President Trump is) reaffirming America’s role as a leader in the free world,” he said. To a crowd of American soldiers, the vice president challenged the individuals to choose their own path:

“My challenge to all of you today is write your own story. Right now, in your mind. See it and go live it.”

These graduates did not boo the vice president, protest or cause chaos during Pence’s 20-minute address. They sat and listened to a distinguished speaker, regardless of whether or not they agreed with his policy stances. This commencement is an anomaly in an America where free speech and tolerance on college campuses are essentially non-existent, and diversity of thought is frowned upon.

Graduates of the Naval Academy showed respect for Vice President Pence and recognized the honor of being addressed by the vice president. The reactions of the two audiences were wholly different.