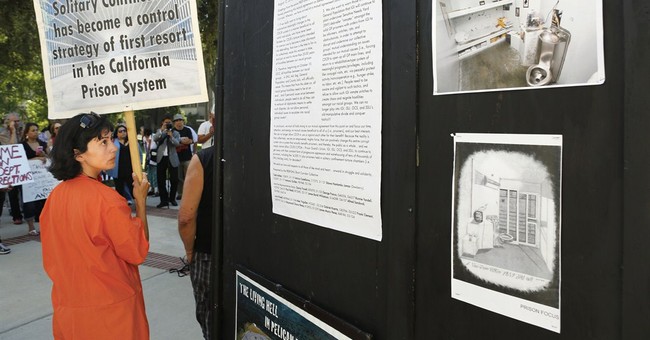 The practice of solitary confinement in the US has been a topic of human rights activists and international organizations for a while. Juan Mendez, the UN Special Rapporteur on torture and a visiting professor at American University, is finally taking action and requesting to visit California prisons and determine if America is violating international law.

The specific law in question is the Convention Against Torture and Other Cruel, Inhuman or Degrading Treatment or Punishment, which was ratified by the U.S. in 1994 and is the same law that came up during previous allegations of torture at Guantanamo Bay and Abu Ghraib. Determining whether California is torturing prisoners is difficult, however, because the official definition of torture is vague (emphasis mine):

For the purposes of this Convention, the term "torture" means any act by which severe pain or suffering, whether physical or mental, is intentionally inflicted on a person for such purposes as obtaining from him or a third person information or a confession, punishing him for an act he or a third person has committed or is suspected of having committed...

Mendez seeks to determine through his visit, by seeing prison conditions firsthand and meeting with prisoners, whether California's solitary confinement practices are "severe" enough to constitute torture.

Many in the US are calling the request a desperate move by the UN to stay relevant, and others are recommending that California deny the special investigator access in order to preserve US sovereignty and make a statement about decentralization over global governance.

This is also not the first time a UN Special Rapporteur tried to intervene in California on behalf of human rights. Forbes describes how an investigator wrote to the mayor of Sacramento last year in a letter that seems ridiculous to Americans who have a long history of federalist tradition and general pessimism about centralized global organizations:

Last year a different U.N. Special Rapporteur sent a letter to Sacramento Mayor Kevin Johnson warning the city that their drinking water and sanitation for homeless people were potentially in violation of international human rights standards. In this case the U.S. had signed, but not ratified, an international treaty and the Special Rapporteur on the Human Right to Safe Drinking Water and Sanitation came knocking. Yes, there is such a person, and she believes she has jurisdiction in Sacramento, California.

The ball is back in America's court: both the US State Department and the state of California would have to clear the visit in advance. Governor Jerry Brown has yet to respond to the request, but the State Department is reportedly "open to continuing to discuss" it.