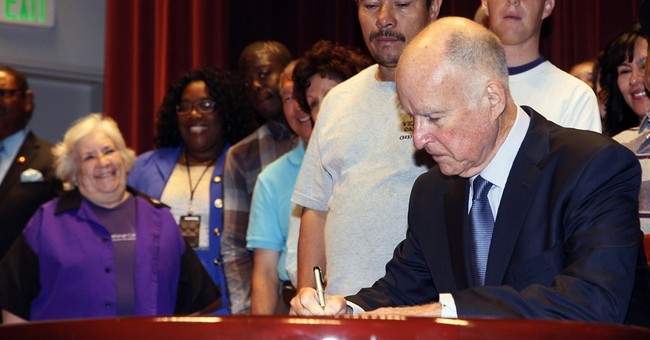 California Governor Jerry Brown has been on a signing spree, and the new laws are quite controversial. Some have pointed out that the Right's reaction has been "surprisingly muted" - but it might be that conservatives cannot decide where to begin on the shocking new legislation. Three of the most insane laws going into effect in California are:

Although its supporters have good intentions, the new law allowing driver's licenses for illegal immigrants is dangerous.

By passing the law in the absence of comprehensive immigration reform at any level of government, California is blatantly challenging the U.S. Constitution. Under the full faith and credit clause, a citizen can take a Virginia state driver's license and drive through or even move to another state with no problem. California is indirectly forcing other states to accept illegal immigrants' driver's licenses.

In addition, because the document requirements would be less strict for illegal immigrants (by definition without secure documentation) this law poses a national security threat. The Federation for Immigration Reform has more on how this and similar laws can and have been abused by terrorists.

3. Children Can Have More Than Two Parents of Any Gender Combination

The fact that a law passed that completely rejects the traditional family - even in California - is telling about American society. The rationale seems to follow an 'anything goes' mentality (emphasis mine):

The measure, authored by a Democratic state senator, was aimed at upgrading the law to reflect supposed modern changes in the family structure.

For instance, same-sex couples who use a member of the opposite sex to produce, would fall under this category.

Of course those who will be most affected by the legislation, children, will have no say in the matter until it is too late for their own upbringing.

As Rush Limbaugh said, "This is the kind of thing that we used to be mocked for saying could happen someday."