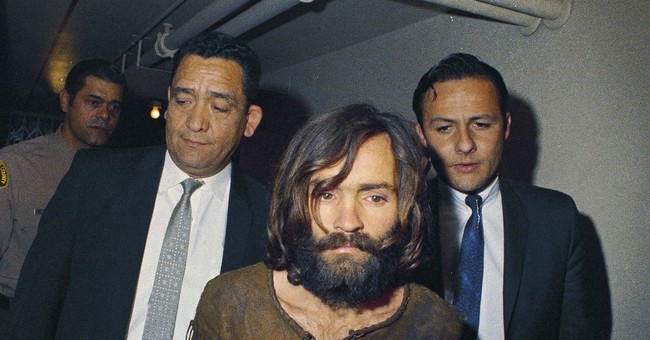 Monday is already off to a good start.

Charles Manson, the infamous cult leader, died at the age of 83 Sunday evening, according to the New York Post:

He’d been in failing health for months and was first hospitalized back in January, reportedly with serious gastrointestinal problems.

Manson and his band of cult followers, Charles Watson, Susan Atkins, and Patricia Krenwinkel were responsible for the heinous and horrific murders of Steve Parent, Sharon Tate and her unborn child, Jay Sebring, Abigail Folger, and Wojciech Frykowski in 1969. Just a day later, Manson's followers murdered Leno and Rosemary LaBianca.

Sharon Tate was married to film director Roman Polanski who is back in the news as he faces new sexual assault allegations.

Currently, all of Manson's followers except one are alive and behind bars. The exception is Susan Atkins, who died in prison of brain cancer in 2009. Though members of the Manson Family have applied for parole numerous times, they have all been denied.

Leslie Van Houten, who took part in the murder of Mr. and Mrs. LaBianca, was granted parole in September of this year but the decision must be reviewed by California Gov. Jerry Brown.

According to the New York Times, Manson and four of his followers were sentenced to death but, because California changed its death penalty laws in 1972, their sentences were reduced to life sentences.