Nikki Haley to UN: 'Our Principles Are Not Up For a Vote' 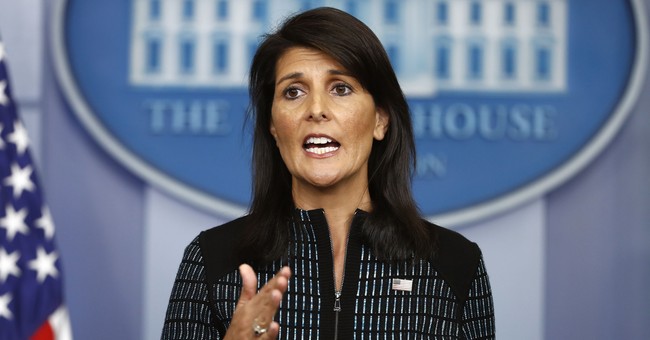 Every day the American people see why former South Carolina Gov. Nikki Haley was a fantastic pick to fill the role of U.S. Ambassador to the United Nations.

From the moment Ambassador Haley accepted the position, she has worked hard to fight for American interests, fights for democratic values, stands against dictatorial regimes, and reasserted the United States onto the world stage.

On Wednesday, the United Nations General Assembly overwhelmingly voted for a resolution condemning the United States's embargo on the nation of Cuba. The vote was 191-2, with Israel being the only country to side with the U.S.

Ambassador Haley was unphased by the UN's decision. She stated:

Let’s be honest about what we really see going on here. This assembly does not have the power to end the U.S. embargo. It is based in U.S. law, which only the United States Congress can change.

The statement from Ambassador Haley reiterated that the United States is an independent and sovereign nation that will not be bullied by nations that talk a good talk while at the same time carry out human rights abuses against their people. It was made clear that the United Nations does not control the U.S. Congress.

Speaking to the assembly, Ambassador Haley explained that the United States is a democracy and that the people exercised their constitutional right to elect President Trump and that President Trump's decision to leave the embargo in place is not up for debate.

To those who are confused as to where the United States stands, let me be clear: as is their right under our Constitution, the American people have spoken. They have chosen a new president, and he has chosen a new ambassador to the United Nations.

Ambassador Haley went on to add that the United States will not engage with a country that deprives its people of "their human rights and fundamental freedoms" and uses the profit of trade to continue to prop up a dictatorial regime.

"The United States does not fear isolation in this chamber, or anywhere else. Our principles are not up for a vote," she added.