The Wall Prototypes Are Going Up In San Diego 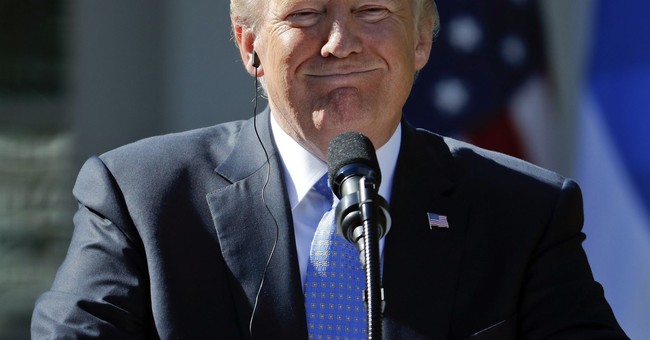 They're big. They're beautiful. And they're 30-feet tall.

President Trump promised a wall along our southern border, and he promised that prototypes would be designed and tested. That promise is coming to fruition.

Eight different walls are being built by construction companies from five different states. According to the reporting of NPR, four are made of concrete, and four are made of steel and concrete. Amazingly, one of the eight is topped with spikes.

Construction crews are erecting eight looming prototypes of President Trump's border wall in a remote section of the San Diego borderlands. Four are solid concrete; four are made of steel and concrete; one is topped with spikes. They all approach 30 feet in height. Customs and Border Protection is paying $20 million to six construction companies from Mississippi, Maryland, Alabama, Texas and Arizona. Crews in white hardhats operating cranes and forklifts are expected to complete the models by the end of the month.

President Trump, unsurprisingly, is happy with the progress. "BORDER WALL prototypes underway!" he tweeted out on Tuesday.

Even though the prototypes are being built and Customs and Border Patrol will look them over to deem their effectiveness, there is no guarantee that the goal of building the actual wall is getting any easier.

The cost of the wall will most likely be in the billions of dollars and Congress will need to find a way to approve the funds for it. The construction of the wall is still facing unanimous opposition from the Democratic Party.

NPR reports that construction of the prototypes is drawing attention, not just from those here at home, but from news across the pond.

Every day, border agents in crisp green uniforms shuttle in news crews from as far away as the Czech Republic and the Netherlands to shoot video of the busy construction site just east of the Otay Mesa port of entry.

Opponents of the wall think this is merely a publicity stunt so President Trump can appeal to his base. That may or may not be true, but seeing part of President Trump's plan being carried out has to be reassuring to his voters.

So far the construction of the prototypes is going to plan. Ironically, as the walls are being built, illegal immigrants trying to cross the border by climbing the current ten-foot barriers are being arrested.

It's going to be very disappointing for those who want to enter the country illegally if the ten-foot wire fencing becomes thirty feet of solid steel or concrete.