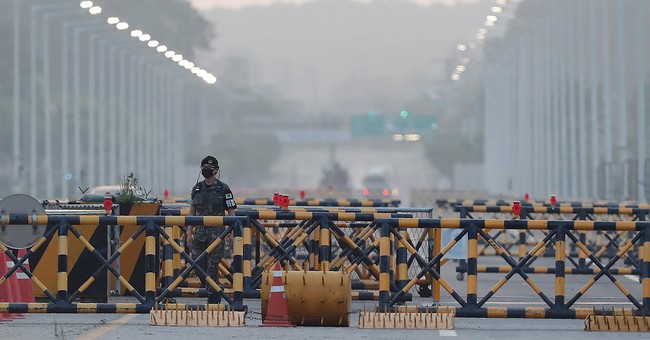 An expected attack by North Korea against South Korea has been called off after months of invectives from the state press and other sources against the South Korean people. At a preliminary meeting on Tuesday, Korean military officials “took stock of the prevailing situation” and scrapped discussion of retaliatory measures intended for the next official meeting of the Worker’s Party of Korea Central Military Commission.

“By exercising my power authorized by the Supreme Leader, our Party and the state, I gave an instruction to the arms of the department in charge of the affairs with enemy to decisively carry out the next action,” Kim Yo Jong, Jong-un’s sister and the first vice department director of the Central Committee of the Workers' Party of Korea, declared in a statement published by an official state media outlet.

The threat came on June 13, days before North Korea blew up an empty inter-Korean liaison office within its territory, symbolically destroying diplomatic avenues for North-South reconciliation. State media described it as a “first stage step of the primary action” to “punish” South Korea for its crimes.

North Korea accuses South Korea, along with the United States, of reneging on agreements to reduce economic sanctions in exchange for North Korean denuclearization:

“If I, though against my will, simply copy the catchphrase used by the village in the south, it is because 'conditions are not met' for denuclearization,” said Kwon Jo-Gung, Director-General of Department of U.S. Affairs of Foreign Ministry of DPRK, in a statement, mocking the overused phrase.

Defector groups currently seeking sanctuary in South Korea had also dispatched thousands of leaflets criticizing the Kim regime into the Northern country. The North reportedly has designs to respond in kind, announcing on June 22 that it had prepared 12 million leaflets and 3000 carrier balloons to scatter anti-South invective throughout the southern peninsula.

“The time for retaliatory punishment is drawing near,” the report states.

Ramon Pacheo Pardo, a Korea expert at King’s College London, told CBS that he was puzzled by North Korea’s actions. “It does seem a bit early to de-escalate. Clearly they weren't getting anything from South Korea other than a stern response. So that could be a reason.”

“The way it's worded, it seems to be a wait-and-see approach before deciding on the next step; i.e., more de-escalation or re-escalation,” Pacheco Pardo said.

Kim Dong-yub, an analyst from Seoul's Institute for Far Eastern Studies, surmises that the North attempting to bolster its bargaining clout against its southern neighbor while maintaining a strong grip on its weapons programs. "What's clear is that the North said [the military action] was postponed, not canceled," said Dong-yub.

North Korean state media reports that on Wednesday, South Korean defense minister Jong Kyong Du urged North Korea to withdraw the military action plan alluded to by Kim Yo Jong. A statement issued by the WPK’s vice chairman confirmed analysts’ expectations of future action: “It may sound threatening, but nothing will turn out favorable when our "suspension" becomes "reconsideration.”