Venezuela Threatens Withdrawal from OAS in Response to International Pressure 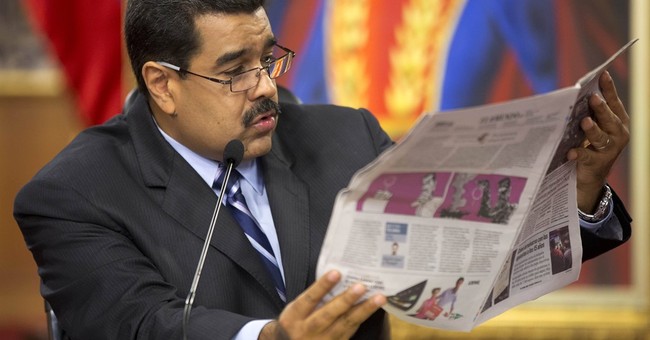 Amidst increasing international pressure from the Organization of American States (OAS) and escalating civilian conflict against the state, the socialist government of Nicolas Maduro has now threatened to exit from the OAS if the group holds a meeting regarding Venezuela without the country's consent. Although the regional organization has already threatened to suspend Venezuela from the body should it not initiate elections.

Delcy Rodriguez, Maduro's minister of Foreign Affairs, broadcast the threat on Venezuela State TV on Tuesday night. Rodriguez declared, upon instruction from Maduro, "We are not going to continue allowing arbitrariness, to follow a coalition of governments with an ideological political bias known against Venezuela."

Rodriguez continued that discussing a country without its backing violates the rules of the OAS. She discussed that there are states within the OAS that are following a right-wing, imperialist agenda against Venezuela backed by the U.S., according to teleSur.

This declaration comes the night before OAS representatives are to meet in Washington to discuss a proposition by 16 OAS members (to include the U.S., Mexico, and Brazil) to call a meeting of foreign ministers in order to further discuss the crisis in Venezuela.

US News reported on the prospects and requirements for Venezuela to be booted from the body.

"For Venezuela to be suspended from the OAS, a two-thirds vote in the 34-nation OAS' General Assembly would be needed. Caracas can count on support from many poor Central American and Caribbean nations that receive Venezuelan crude under favorable terms.

Leftist allies like Bolivia and Ecuador would also throw their weight behind Maduro, a former bus driver and union leader who rose to become foreign minister under his late mentor Hugo Chavez."

Maduro, now referred to as a dictator by fellow Venezuelans, gave a "revolutionary" speech on Tuesday, in which he stated he is prepared to do whatever it takes to continue his socialist policies-- which he claims helps the working class-- and said he would even give his life, according to AP. Maduro declared Venezuela only has one destiny, and that is "the victory of revolution."