This Is New: SecState and SecDef that Don't Butt Heads 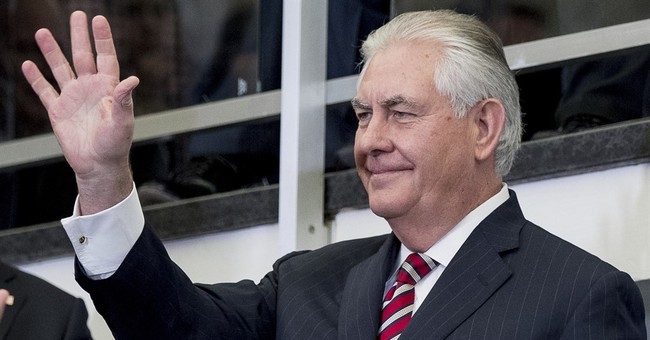 It's been a trend: the Secretary of State and Secretary of Defense generally fail to agree. However, it seems as though things are looking up for our newest Secretaries of State and Defense. Citing a classic combination, Rex Tillerson and Jim Mattis appear to get along "like gin and vermouth," Tillerson's top policy aid told the Independent Journal Review.

In response to these volatile relations, Tillerson and Mattis are being proactive in perpetuating agreement and cooperation, which the IJR detailed in their report from Tillerson's first sit-down interview since taking office.

In order to provide for a "cohesive, strategic vision," anything presented in National Security Council meetings must first be approved by both of these two, as Senate Foreign Relations Committee Chairman Bob Corker explained to IJR. He added that he hasn't seen a dynamic quite like this since he joined Congress in 2007.

Also revealed in the interview was the odd fact that Rex Tillerson didn't want or ask for the job of Secretary of State. As it turns out, Tillerson had not even met President Trump before the election. But, he then added that his wife was right when she convinced him he is supposed to do this job under God's will. The fact that Tillerson had no relations whatsoever with the President is ultimately a breath of fresh air, as the IJR explained.

"This is not a man who sees a U.S. president in the mirror every morning, which is the kind of personality Washington, D.C., is used to dealing with in such a prestigious and sought-after job. And he does not have patience for the games we’re used to playing here.

Tillerson, who will be 65 on Thursday, senses an opportunity to systematize the State Department and rack up some wins, and he seems intent upon removing emotion from the process. There aren’t likely to be goosebump-inducing, soaring speeches. It’s business."