Another Alleged Executive Order, This Time Towards Iran 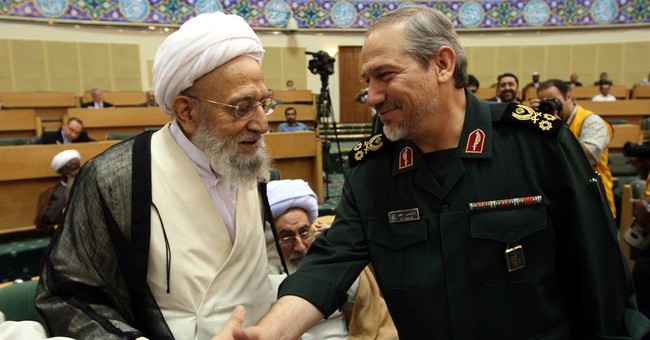 Another alleged executive order draft has leaked, and this one is not messing around.

According to U.S. officials, several agencies have been consulted by the Trump Administration on the matter of having the Department of State declare Iran’s most powerful security force, the Islamic Revolutionary Guard Corps (IRGC), a terrorist organization, as Reuters reported Tuesday night. The IRGC reports to Iranian Supreme Leader, Ayatollah Ali Khamenei, who holds much more power than President Hassan Rouhani.

Foreign Policy said in their National Security Brief to subscribers that although it’s not yet finished, this could potentially be a big step in the Iran matter-- which has escalated quickly since the U.S. transfer of power.

The draft is not completed, and it’s unclear if it will make it to the president’s desk, but the move would be an indication of how hard a line the Trump administration may take with Tehran. The IRGC is one of the most powerful institutions in Iran, holding sway over vital aspects of the country’s economy, and military.

A declaration of a foreign terrorist organization (FTO) by the Department of State, in accordance with the Treasury, is a very important move in the fight against adversary terrorist groups. The department has a criteria of three points that the group must meet.

The criteria for FTO designation are as follows:

Iran denies any such involvement in terrorist actions, and the Bureau of Counterterrorism (which is within the DoS) would have to compile a significant record of intelligence and information that links the entity to terrorism.

This supposed move, along with the routinely mentioned move to designate the Muslim Brotherhood an FTO, is a highly contested one, as Reuters explained in their report.

Naming Iran's single most powerful military and political institution as a terrorist group could have potentially destabilizing effects, including further inflaming regional conflicts in which the United States and regional arch-rivals blame Iran for interference. Iran denies those allegations.

It would also likely complicate the U.S. fight against Islamic State in Iraq, where Shi’ite militias backed by Iran and advised by IRGC fighters are battling the Sunni jihadist group.

However, Reuters also stated that the move would deter foreign investment groups from involvement in Iran’s economy. The IRGC is a large actor in many parts of the Iranian economy, including oil and transportation.

The U.S. has previously blacklisted multiple affiliates of the IRGC, including groups and individuals.