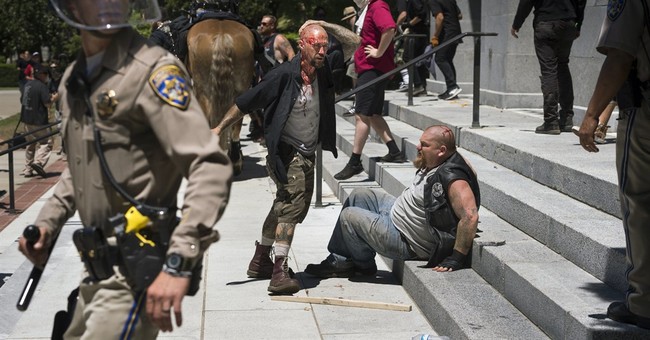 California white supremacists intended to march on their state's capitol but were faced by armed anarchists holding signs stating "Nazi Scum" and "No Racism in Our State."

The neo-Nazi and counter protesters clashed almost immediately after the rally began. Twenty minutes later, ten people were stabbed or wounded and two of those encountered life threatening situations. Ages of the victims range from 19 to 58 and all are expected to survive.

According to CHP, the 400 counter protesters attacked the 30 demonstrators with knives, bottles, and wooden stakes.

The brawl was fought between The Traditionalist Workers Party (TWP) which is known as a neo-Nazi white supremacist group and a group of anarchists and anti-fascists.

TWP paired with the Golden State Skinheads for the permitted Sunday rally but brought knives in preparation of any attacks. The groups had been threatened over social media before the event and expected to be outnumbered by counter protesters ten to one.

"They attacked us with all these weapons chanting 'kill the Nazis, kill the Fascists' while they were armed with weapons," Traditionalist Worker Party Chairman Matthew Heimbach told Fox News, "These were not people. These were radical left wingers that were coming to get in a fist fight. They were yelling they would kill our members ... They tried to do just that. They stabbed one of our members. Hit him in his arteries."

The rally was scheduled for two hours in front of the Capitol. For safety, 100 police officers were deployed to watch over the event.

Members of both the neo-Nazi groups and the counter protesters where wounded during the brawl. Video from ABC10 shows protesters fighting each other with sticks and throwing things at each other.

Insane video. Crowd sees any signs of "Nazis" and they run&attack. A lot of people bleeding/getting maced. @ABC10 pic.twitter.com/PoFhILfZ95

The Southern Poverty Law Center has described TWP as the political wing of the Traditionalist Youth Network, which aims to “indoctrinate high school and college students into white nationalism.”

"The indecent that happened at the Capitol yesterday was simply unacceptable and any violence of any kind will not be tolerated in Sacramento," said Sacramento Mayor Kevin Johnson in a statement, "I commend our law enforcement and fire department on their swift response ... Over the past eight years, we have worked diligently to bring all sides to the table."

Sacramento Fire Department labeled this as a "mass casualty event" but the police currently have no arrests for the violent acts that took place on Sunday afternoon.