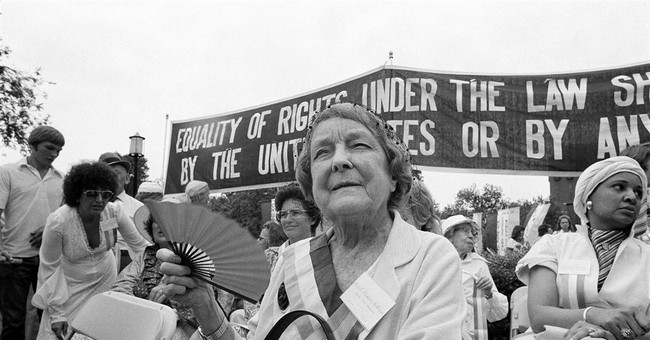 Editor's Note: This post was co-authored by Sophie Carson and Catherine Dunn.

The conservative women of America are forming an army and reclaiming feminism.

This weekend, the Heritage Foundation hosted the annual NeW National Conference. NeW, The Network of Enlightened Women, started in 2004 as a book club at the University of Virginia. Since then, the group has grown into a support system for conservative women on more than 25 college campuses around the country.

Karin Agness, founder and president of NeW, said, “Often on college campuses we hear about all the negative things going on so it’s been great to be a part of NeW and find all these awesome conservative women on college campuses who feel very lonely … It’s our job in NeW to give them the tools they need to be successful.”

NeW provides a safe space for conservative women to speak about principles and political issues.

“This just gives conservative women a voice on campus,” said Kimmy Hammond, president of the NeW chapter on Western Carolina University's campus and winner of “New Chapter of the Year” and “Social Media” awards this weekend.

The topic of feminism was the center of conversation at this weekend’s conference.

“Feminism should be a celebration of the strength of women,” said guest speaker Kat Timpf, a conservative reporter, TV personality and comedian. “The liberals have hijacked feminism and it’s too important to let go.”

“I don’t think calling a group of people ‘you guys’ is very sexist,” said Timpf. She explained that calling everything sexist “discredits the entire movement” and marginalizes actual sexism.

The dedication to political correctness is leading the movement in the wrong direction, Timpf claimed. The term ‘benevolent sexism’ exemplifies this dedication to correctness, arguing that women shouldn’t be given extra treatment; if a man holds a door open for a woman, for example, he is sexist.

Feminism has been brought up in national news constantly, especially in regards to the presidential race. Timpf criticized the way feminists have latched on to Hillary Clinton’s campaign, implying that women have to support Clinton merely because she is a woman.

The “special place in hell” that feminist Madeleine Albright said was reserved for women who don’t support Hillary must be filled with “reasonable women,” said Timpf.

Supporting a candidate just because of their sex is a completely backwards way of thinking.

Timpf and the women of NeW call upon the young conservative women in America to reclaim the movement.

NeW gives hope to the future of the party allowing women to realize feminism and female empowerment is in “doing” and not complaining about what is being done to women.

The conservative women involved in NeW are fighting for feminism. They want to fight for equality and empower women while realizing that women are still biologically different from men.

Feminism was only one of the hot topics discussed during this weekend's gathering of collegiate conservative women.

To find more information about the organization or any upcoming events visit enlightenedwomen.org.