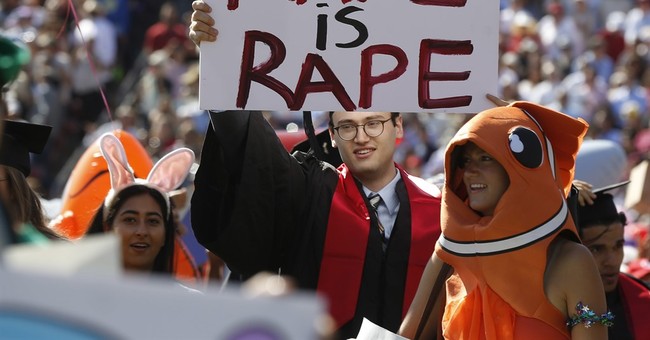 It was not your typical commencement ceremony this Sunday at Stanford University.

Students used the traditional "walky walk" and commencement ceremony to protest against the lenient sentence given to former Stanford student and convicted rapist Brock Turner.

Signs reading "Rape is Rape" and "Stanford Protects Rapists" were held by some of the graduates. Others put "1 in 3" on their caps or signs to represent the World Health Organization's statistic stating 1 in 3 (35%) of women worldwide have experienced either physical and/or sexual intimate partner violence or non-partner sexual violence in their lifetime.

A plane dragging a banner stating, "Protect Survivors. Not Rapists. #PerskyMustGo" paid for by the women's advocacy group UltraViolet flew over the ceremony for a few hours.

While neither Brock Turner nor the case was specifically mentioned, references to them were shown and heard throughout the day.

Stanford President John Hennessy asked for a moment of silence for all sexual assault victims.

"Look, I am the father of four daughters," commencement speaker Ken Burns said during his speech, "If someone tells you they’ve been sexually assaulted, take it effing seriously and listen to them. Maybe someday we’ll make the survivor’s eloquent statement as important as Dr. King’s letter from the Birmingham jail."

One student activist held a sign featuring the Stanford tree with the words "Rape culture has deep roots" along the side of it. At an institution not known for protests, these students made a loud statement.

Attention stays on the verdict of Turner's case through Sunday's commencement ceremony as well as the creation of a Facebook page supporting Turner.

The "Brock Turner Family Support" community Facebook page's description reads, "They are dealing with a monumental life-changing and tragic situation and their expenses continue to mount!"

Posts from the page focus on the effects of excessive drinking, claiming Turner and his family are the victims in this situation.

A post on June 10 stated Turner "was going to bring OLYMPIC GOLD medals home to America and that's a lot more important than some party chick's hangover and fuzzy memory!"

The comments on this post reach almost 20,000 and the shares are up to more than 8,000. These responses are almost all negative. Facebook users criticize the family and Turner for not taking responsibility for the ex-swimmer's actions and placing blame on both party culture and the rape victim.

In addition to the ongoing public reactions, new evidence also continues to reveal itself.

According to CNN, a witness claimed to see Turner standing over the victim with a light coming from his phone. Prosecutors then found text messages on Turner's phone from numbers asking "WHOS T-- IS THAT?" A picture uploaded to an app called GroupMe was unable to be obtained because of the protections of the app.