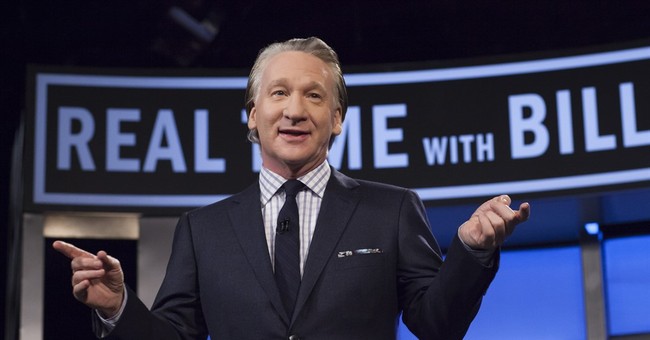 It had to happen. He's mentioned it multiple times in interviews. No, it's not the "I didn't leave the Democrats, the Democrats left me" bit. It's the "this stuff didn't happen" six-to-eight years ago portion. Comedian Bill Maher has made a good living mocking societal trends and conservatives. His show "Real Time" has been going strong since 2003 following his forced departure from ABC. Yes, it had segments that made conservatives' eyes roll. Yes, he also took potshots at liberals. The latter is becoming more frequent and more aggressive, especially when it comes to LGBT rights. That's the stuff that wasn't a thing nearly a decade ago; four-year-old kids coming out as transgender. The comedian devoted nearly 10 minutes shredding the LGBT orthodoxy on this issue, noting peculiar trends, and adding that having questions isn't bigotry.

Maher mocked that at the current rate, we're all going to be gay by 2050. His point is that there must be some level of questioning concerning whether this is a trendy topic for kids. We've all been there. When you're young and angry, shock value is part of a phase—the rage against the machine phase. The problem is coming out of the closet isn't shocking anymore. You could argue that's a good thing because we're now a more open society, but the limits to that, which can have devastating impacts on one's life, are asking whether giving puberty blockers is a good idea. You know what I mean concerning consequences – it's the woke mob coming to torch your life. It has happened.

Questioning whether this and gender reassignment surgery for kids is healthy can end with you being hurled into the gulag as a transphobic bigot. Maher is a hardcore liberal. He's pro-gay rights, but he's not a sheep either.

This commentary will probably earn him the ire of the left for suggesting that being LGBT right now could be heavily influenced by the "what is trendy" category. He's not wrong. He noted why the spikes in this community are regional. As he noted, Ohio is suppressing them, or California is creating them. He also reminded his audience that children are impressionable and very stupid. If a kid knew who he or she wanted to be at eight, this world would be dominated by cowboys and princesses (via Fox News):

"If you attend a small dinner party of typically very liberal, upper-income Angelenos, it is not uncommon to hear parents who each have a trans kid having a conversation about that. What are the odds of that happening in Youngstown, Ohio? If this spike in trans children is all natural, why is it regional?" Maher asked. "Either Ohio is shaming them or California is creating them… If we can't admit that in certain enclaves there was some level of trendiness to the idea of being anything other than straight, then this is not a serious, science-based discussion. It's a blow being struck in the culture wars using children as cannon fodder."

Maher later continued, "I'm sure the vast majority of parents do not take this lightly. And that it is very hard to know when something is real or just a phase. And I understand being trans is different. It's innate. But kids do also have phases. They're kids, it's all phases. The dinosaur phase, the Hello Kitty phase, one day they want to be an astronaut, the next day you can't get them to leave their room. ‘Gender-fluid’ — kids are fluid about everything. If kids knew what they wanted to be at age 8, then the world would be filled with cowboys and princesses."

Dr. Erica Anderson, a trans clinical psychologist, says that the LGBT stuff has gone off the rails and agrees that a significant part of the upward trend is due to social media influence. No kidding.

As Pride month is upon us, Maher noted that there are no gay men who are grand marshals in the upcoming NYC Gay Pride parade. It's one lesbian and three transgenders. Gay men are now as cis as morons, Maher joked. He also highlighted the insanity of parents who won't let their kids walk to the corner of their street without an epi-pen, GPS tracker, and a helmet but are totally fine pumping them full of puberty blockers or getting them gender reassignment surgery.

The science isn't clear on the long-term effects of puberty blockers, but as the comedian noted, common sense dictated that reversing a raging tide of hormones could lead to very harmful side effects.

Maher joked, "If you're a man who wants to experience life without a pair of balls, you do not have to get surgery. You can get married."

"Maybe the boy who thinks he's a girl is just gay, or whatever Frasier was," added Maher.

"Maybe the girl who hates girly stuff just needs to learn being female doesn't mean you have to act like a Kardashian…maybe childhood makes you sad sometimes, and there are other solutions besides 'hand me the d**k saw.'"

We talk about those getting canceled by the culture wars, and this New Rules segment by Maher would warrant the mob coming after him. They already do for his takes on free speech, anti-political correctness, and radical Islam. The thing is, he doesn't care. He's already rich. He takes care of his earnings. And there's no way he's losing his job. It's HBO. He's not going anywhere.

Again, it just shows you how insane the left has become when a hardcore liberal comes off as a conservative, at least to the crowd that veers into prog territory.

At this rate Bill Maher is going to get canceled https://t.co/uXBrYtKPBd

Bill Maher: "If This Spike In Trans Children Is All-Natural, Why Is It Regional?" https://t.co/MHLoj7Jkal

Comedian Bill Maher warned against gender transition medicine for children and trends showing the LGBTQ+ population "doubling every generation" in a controversial monologue that is angering progressives on social media.

the bill maher segment feels like the fever breakinghttps://t.co/OeZO3zMvvw