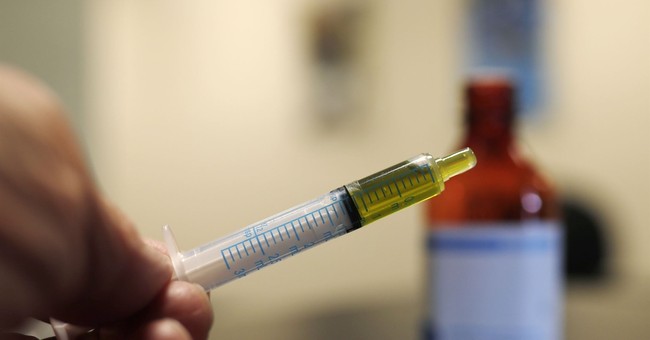 Julio wrote about this first yesterday. It’s insane. These people will inflict pain if mocked them—literally. We saw that with the 2020 riots. On a smaller scale, if they’re given the opportunity, they will even engage in medical torture. It appears that’s the case for a Wake Forest medical student. A patient made fun of her pronoun button and proceeded to intentionally miss his veins when doing some blood work. She poked and prodded him multiple times, saying she missed the vein. She knew what she was doing, and then bragged about it on social media:

Kychelle Del Rosario, a fourth year medical student at Wake Forest School of Medicine, posted on her Twitter account she pricked a man who was having a blood draw twice when she missed the vein after he mocked a button she wore that listed her pronouns.

The tweet, which has since been deleted along with her account, stated, "I had a patient I was doing a blood draw on see my pronoun pin and loudly laugh to the staff 'She/Her? Well of course it is! What other pronouns even are there? It?' I missed his vein so he had to get stuck twice."

In a published piece, Del Rosario wrote in 2021, "As a current medical student, I am passionate about advocating for transgender rights, especially in health and healthcare access. I plan to make taking care of transgender patients an integral part of my future practice."

First, that’s horrifying. Second, this woman has ruined her career. It’s over. She deleted her social media accounts but it’s too late. Screenshots are forever. The Internet is forever. What hospital would ever hire this walking lawsuit, especially over something as small as the mocking of her pronoun punches. Patients can be difficult. You don’t need to be a medical doctor to know that—and the mocking of her button set her off to do this? This is minor, MINOR league stuff.

Now, Wake Forest has announced that they’ve put her on leave:

BREAKING: @wakeforestmed student who boasted about abusing a patient for laughing at her pronoun pin has been placed on leave https://t.co/Lefm8CvrGa

I have again (for the fifth time now) reached out to Wake Forest about Ewen Liu, who called the patient mistreatment "karma." No reply on her yet. Nor has Wake Forest explained why boasting about patient injuries, even if accidental, doesn't justify immediate expulsion. pic.twitter.com/LoiTFbjnjD

These people are unhinged and cannot operate or function in a normal society. We’ve seen this repeatedly. The ‘woke’ are broken—mentally and morally. Keep them away from schools, medicine, government, media—basically any place where normal people work.