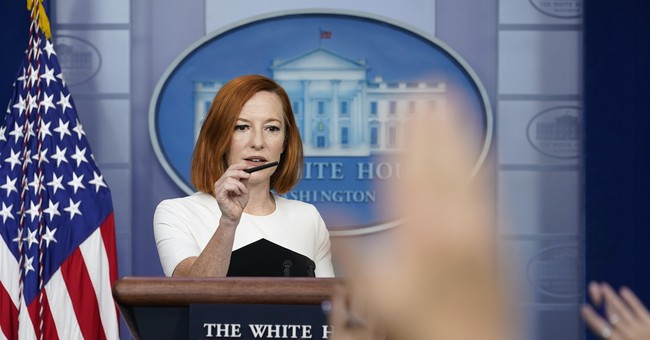 What is going on with this administration? It’s no wonder why they can’t get anything done. Besides the fact that they’re pushing a bad agenda, they can’t message. It’s in a perpetual state of doing k-turns. Before we tee off what Jen Psaki said, let’s go to Joe Biden’s presser. Credit to him for not collapsing. Biden pretty much gave the green light for Putin to invade Ukraine and said that the 2022 midterms could be illegitimate if his federal takeover of elections bill isn’t passed. Biden’s communications team did a lot of cleaning up. First, clarifying that any incursion into Ukraine by Russian troops would be met with severe consequences, which is not convincing in the slightest. Out top diplomat, Antony Blinken, is a deer in the headlights. You saw how the Chinese just rolled him in Anchorage last year. You don’t think the Russians don’t play hardball when they see abject weakness.

Jen Psaki: "My advice to everyone out there who's frustrated, sad, angry, pissed off, feel those emotions, go to a kickboxing class, have a margarita..."

UNREAL. How is this the "advice" that is now coming from the White House?pic.twitter.com/ENphGJCryZ

And now, as the domestic front burns to ash as Americans are feeling the pinch of inflation, Psaki all but said that everyone who’s mad should just drink. Yes, hit the bottle is what many are expecting to hear as we descend into economic turmoil. She also mentioned going to a kickboxing class. Americans can't afford that while others might not be able to enter a gym due to COVID passports.

I thought this was the administration that was competent. Weren’t the adults supposed to be back in charge? They’re not. Joe Biden is not in charge. There’s no direction. There’s no sense of urgency. It’s a suffocating condescension that everyone else is wrong and they’re right. Biden even admitted that he doesn’t believe the polls—all of which show him with approvals in the trash. Even more foreboding is his total collapse with Independents and centrists—middle America is gone. Biden doesn’t care. He thinks he’s done a great job, and he’s obviously impressed with himself despite being a brain cell away from being declared mentally defective.

Joe Biden can’t do the job. He’s too slow. He’s too stupid—and that’s rubbed off on his staff apparently who are promoting alcohol abuse instead of dealing with these problems. Inflation was supposed to be transitory. Now, it’s ‘Biden-flation.’

And if Democratic operatives think it’s a net-positive to have grandpa diapers on the campaign trail trying to help Democrats for the 2022 midterms, they’re probably using some of the drugs Hunter Biden smoked. The man is a cancer to his party. Biden being around would cause Democrats to drink—that’s for sure.