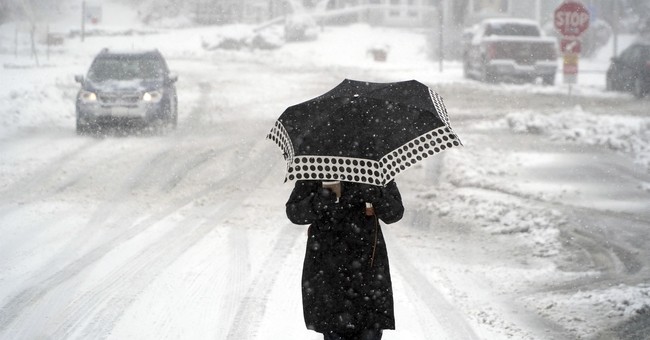 A winter storm blanketed the DC-Maryland-Virginia area with a ton of snow on Monday morning. I mean, it dumped nearly a foot of snow. You know what that means; everyone forgot how to drive. Worse yet, folks in cars that shouldn't be out on the roads were getting stuck or becoming involved in accidents. It rained previously so there was no way to pretreat the roads for the inevitable icing. The mild January day became something out of "The Day After Tomorrow" hours later.

Now, I-95 South is a total wreck. An accident involving tractor-trailers caused a massive backup. Cars have been stuck on the road at a standstill for hours, including Sen. Tim Kaine (D-VA). There were reports that some vehicles were running out of gas as drivers tried to stay warm. So, who's to blame? Why was there such a delay in the mobilization of plow trucks and other services? We cannot get to that because some folks are blaming the wrong people. You guessed it—Gov-elect Glenn Youngkin, a Republican, was berated by some clowns on Twitter for failing this weather emergency. There's only one problem: Democrat Ralph Northam is still governor.

Looks Youngkin failed his first test in Va, with traffic stopped for 10-12 hrs on 95 in Virginia. Failure for gov.

Does Virginia’s new Governor Youngkin know people have been stranded on I-95 for 15 hours?
With no help in sight?

12 hours later you are just now “mobilizing” to rescue people stranded in 15 degree temps with no food, water or gas?? @VaDOTFRED @GlennYoungkin #I95 #VDOTsucks

Youngkin is Gov Elect. Ralph Northam is the current governor for a few more days.

Good morning from I95 in Virginia where I have been trapped in my car for more than 20 hours.
I’m not sure but I think I now qualify for Virginia residency. pic.twitter.com/yQsD4znPRG

A CT family returning in a packed car from Florida walked by in the middle of the night handing out oranges as we were stopped for hours on I-95. Bless them! pic.twitter.com/MrmZ1ZF6JJ

I’m frustrated, but not in serious trouble. If you are in trouble on Virginia roads today, call @VaDOT at 1-800-FOR-ROAD.

Youngkin isn't sworn in until January 15. I guess we shouldn't be shocked that this was the reaction from liberals, who hilariously took buckshot to the face with this attack. If anything, one could argue that Northam, who has worn blackface, checked out. I'm not going to go there because he's almost gone, but this was quite a rake-stepping event for liberals and some of the "Blue Anon" crowd.