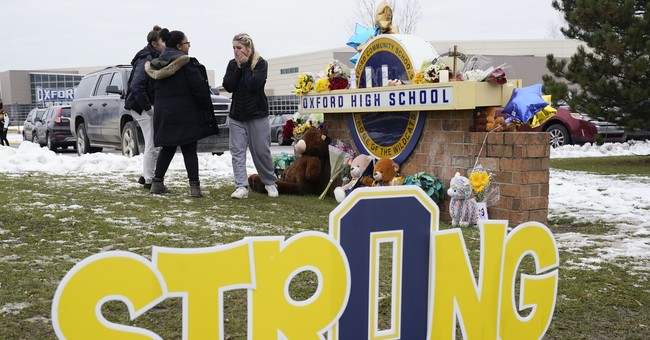 We have more updates from the tragic school shooting in Oxford, Michigan. Ethan Crumbley, 15, has been charged with four counts of murder, attempted murder and terrorism, and a slew of other charges. He's being charged as an adult. Now, his parents, Jennifer and James, are being charged with four counts of involuntary manslaughter as it appears they purchased the firearm used in the shooting for their son. Ethan had a history of disturbing behavior (via NBC News):

The parents of a teenager accused of killing four students at a Michigan high school were charged with four counts of involuntary manslaughter Friday, the prosecutor told The Associated Press.

Jennifer and James Crumbley were charged with four counts of involuntary manslaughter. James Crumbley purchased the weapon for his son days before shooting, according to the sheriff. Under Michigan law, an involuntary manslaughter charge can be pursued if prosecutors believe someone contributed to a situation where harm or death was high. If convicted, they could face up to 15 years in prison.

Ethan Crumbley, 15, has been charged as an adult with two dozen crimes, including murder, attempted murder and terrorism, for the shooting Tuesday at Oxford High School in Oakland County, roughly 30 miles north of Detroit.

"Gun ownership is a right, and with that right comes great responsibility," she says https://t.co/CP3UGp6u0B pic.twitter.com/Xhc4glk5N6

Oakland County Prosecutor Karen McDonald: "I am not here to say that people shouldn't own guns...It's your responsibility, it's your duty, to make sure that you don't give access to this deadly weapon to somebody that you have reason to believe is going to harm someone." pic.twitter.com/EHEVwOCmli

Prosecutor alleges parents of Oxford High School shooting suspect left gun unlocked and failed to take action on reports of disturbing behavior at school. The mother allegedly wrote in a text to him after one report: "lol I'm not mad at you, you have to learn not to get caught" pic.twitter.com/BiR9VTu1U7

Authorities allege that Mr. and Mrs. Crumbley did not properly safeguard the firearm, nor did they report Ethan's behavior to school officials. This entire family could be heading to jail in the aftermath of this horrific shooting.

The Michigan school shooting suspect's parents withdrew $4,000 from an ATM today, an official says, and their cell phones are turned offhttps://t.co/3zOMp0cU1J