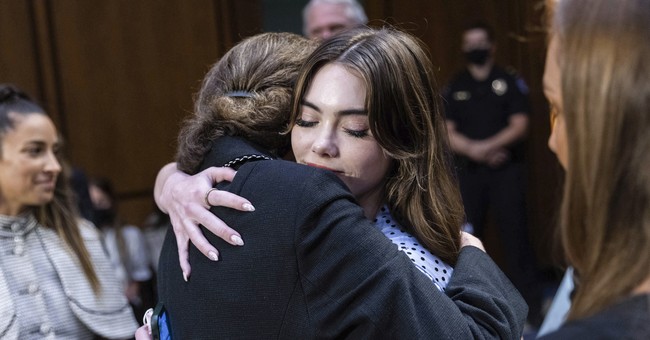 The FBI doesn’t care about victims of sexual abuse. When has the FBI had a good press day? it seems like a long time, almost as long as the last time my beloved New York Giants won the NFC East. The clown show that’s run the Department of Justice has already been irreparably harmed by their dabbling in the Russian collusion hoax. The DOJ also manufactured documents and omitted exculpatory information that led to an ex-Trump campaign official, Carter Page, to be illegally spied on. They also had a spying operation against the 2016 Trump campaign—Crossfire Hurricane—and everyone in the building knew that the whole collusion delusion was based on a Clinton campaign-funded opposition research called the Steele Dossier. This is a huge hoax peddling operation, so when scores of professional gymnasts come forward with their tales of being assaulted by a certain Larry Nassar and it gets ignored, you can see why.

Makayla Maroney, Simone Biles, Aly Raisman, and other current or former members of the US women’s gymnastics team testified today about the FBI’s abject failure in following through with their complaints. It was a total failure. Maroney even went on to say that the FBI ended up making up what she told them about her assault. Yeah, the FBI making up stuff and not being able to investigate anything properly is become a mainstay, huh?

It was a rather brutal day to be a member of the FBI (via Reuters):

.@Simone_Biles: "We suffered and continue to suffer because no one at @FBI or U.S. AG or USOPC did what was necessary to protect us. We have been failed and we deserve answers. Nassar is where he belongs but those who enabled him deserve to be held accountable." pic.twitter.com/fnfWU8RhCw

.@McKaylaMaroney: "After telling my entire story of abuse to the @FBI in the summer of 2015, not only did the FBI not report my abuse, but when they eventually documented my report, 17 months later, they made up entirely false claims about what I said." pic.twitter.com/CC7Wpvg27U

Maroney: “The @FBI, U.S. OG and USOPC sat idly by while dozens of girls continue to be molested by Larry Nasser … They had legal, legitimate evidence of child abuse and did nothing … These FBI agents have committed an obvious crime; they falsified my report & that’s illegal.” pic.twitter.com/YzpJ2A65N6

Maroney: “The @TheJusticeDept refused to prosecute these individuals. Why? Deputy Attorney General @LisaMonaco couldn’t even bring herself to be here today … Why are public servants whose job it is to protect getting away with this? This is not justice. Enough is enough." pic.twitter.com/8PSvnj9MXL

Maroney recalled how in 2015 she spent three hours on the phone telling the FBI the details of her story that her own mother had not even heard, including accounts of sexual abuse she endured during the Olympic games in London by Nassar, whom she described as "more of a pedophile" than he was a doctor.

It was not until July of this year, however, that she said the Justice Department inspector general revealed in a scathing report what the FBI actually did with the information she provided: Failing to document it for a year and a half, and misrepresenting what she told them about her experiences.

"Not only did the FBI not report my abuse, but when they eventually documented my report 17 months later, they made entirely false claims about what I said," Maroney said, with anger in her voice.

Wednesday's hearing comes after the Justice Department's Inspector General Michael Horowitz in July issued a scathing report which blasted the FBI for botching its investigation in a series of errors that allowed the abuse to continue for months.

Several of the gymnasts said they were furious that the FBI failed to immediately interview them about the abuse after they had reported it. Once the FBI finally did contact them, they said the agents tried to downplay the severity of the abuse.

"I remember sitting with the FBI agent and him trying to convince me that it wasn't that bad," Raisman said.

Horowitz said that the now-fired agent who falsified Maroney's statement "could have actually jeopardized the criminal investigation by providing false information that could have bolstered Nassar's defense."

The FBI declined to name the fired agent, but Senator Richard Blumenthal identified him as Michael Langeman.

FBI Director Christopher Wray apologized, but said he didn’t know how this happened (via Axios):

I am deeply and profoundly sorry to each and every one of you," Wray said while testifying before the committee.

"I am sorry that so many people let you down over and over again and I am especially sorry that there were people at the FBI who had their own chance to stop this monster back in 2015 and failed, and that is inexcusable, it never should have happened, and we are doing everything in our power to make sure it never happens again," he added.

The big picture: The hearing follows a report released in July that highlights the FBI's failures to properly investigate the allegations against Nassar, who is serving 40–175 years in prison for sexually abusing young athletes.

The FBI has no friends it would seem. The GOP hates them for their role in peddling fake collusion narratives and illegally spying on Americans. The Democrats cannot fathom how the FBI was incapable of doing their job with regard to Larry Nassar’s sexual abuse. The latter story was real. The former was fiction. It’s very possible that if the FBI had done what they were supposed to do, dozens of young women would have been spared the abuse at the hands of this heinous man. They didn’t. They were too busy trying to remove Donald Trump as president.

The FBI is trash. They were too busy fabricating Russian collusion nonsense against Trump to be bothered with things like stopping serial rapists and sex abusers. https://t.co/mtVj7QlrA9