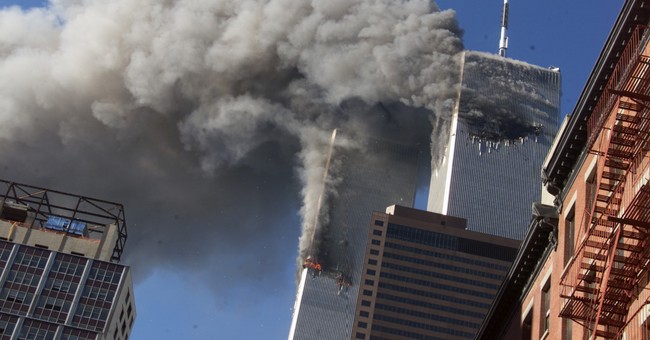 I really don’t know what to say about this one. How dense do you have to be? How far does one have to go to come up with stuff like this about the 9/11 terror attacks? Today is the 20th anniversary of that heinous day. Nearly 3,000 Americans lost their lives when radical Islamic terrorists hijacked airliners and crashed them into the Twin Towers and the Pentagon. United 93 crashed near Shanksville, Pennsylvania after passengers tried to overpower the hijackers. The 9/11 Commission concluded that if these passengers didn’t take action, United 93’s likely target would have been the U.S. Capitol. These passengers were heroes. There were many more that day as well. There are tales of unbridled heroism from first responders and ordinary Americans on that dreadful day. These actions helped saved thousands of lives. It was a day where this country showed the world that we will unite. We will endure. We will honor our dead, celebrate their lives, and their sacrifice. It is not the time to talk about how white people don’t know what terror is and other pseudo-intellectual lectures about racial politics.

Yeah, Jenn Jackson, a Teen Vogue columnist, went down this route. It’s sad because on this issue, I know there are level-headed Democrats who would also roll their eyes. Politics and race weren’t really dwelled on concerning the fatalities of this terrorist attack. Yet somehow this woman threaded that needle.

“White Americans might not have really felt true fear before 9/11 because they never felt what it meant to be accessible, vulnerable, and on the receiving side of military violence at home. But, white Americans' experiences are not a stand-in for ‘America,’” she wrote.

Lady, get a grip. EVERYONE was attacked on 9/11. New York City, our people, our cops, our firefighters, our government, and our Constitution were attacked on 9/11. And all of that transcends race. This literally is a whine fest over nothing.

It's twenty years since 9/11 and I'm still really disturbed by how many white pundits and correspondents talk about it.

I'm watching Andy Card and Jeh Johnson on MSNBC. Card just said that 9/11 was the first time that Americans ever felt fear. He said that it was the last morning we woke up without fear and that the "terrorists" succeeded in introducing us to fear.

White Americans might not have really felt true fear before 9/11 because they never felt what it meant to be accessible, vulnerable, and on the receiving side of military violence at home. But, white Americans' experiences are not a stand-in for "America."

Plenty of us Americans know what it's like to experience fear and we knew before 9/11. For a lot of us, we know fear *because* of other Americans.

We have to be clear that the same motivations that animated America's hypervigilance and responsiveness to "terror" after 9/11 are now motivating the carceral state and anti-immigration policy.

It’s taken awhile for me to say this but I just found the worst take on Twitter. Read the whole thread. https://t.co/f0KxiLwiNv

Going to be an entire day of takes like this. https://t.co/TMuTTJs7m7

At this point, just shut up. We don’t need this right now. We never did. The 2,977 families of the victims don’t need lectures about how their loved ones were part of a “heteropatriarchal capitalistic” machine or that they were pawns in the phantom machinations of the white man. What is this garbage? After 20 years, the Left has become more insane. Who thinks this on the 20th anniversary of the 9/11 attacks? Who?

If you watch National Geographic’s well-produced and harrowing six-episode series on the 9/11 attacks through the eyes of those who survived that terrible day, you’d tell this woman to screw off. The NYPD and the NYFD died protecting white systems. That sounds insane because it is. These people don’t know that. And they wonder why we mock them endlessly and why they simply cannot connect to real Americans. And this might be the worst take ever posted on Twitter.

To the 2,977 victims and their families, we will never forget.

To Ms. Jackson, please log off today because it’s not for you. You obviously don’t want to be a part of it. You sure as hell not offering anything remotely constructive. Shut up and let the rest of us normal people commemorate this day. It’s not for garbage folks like yourself.