Did You Catch the Obama Dividend From the Taliban's Takeover? It's All Over the News...Literally 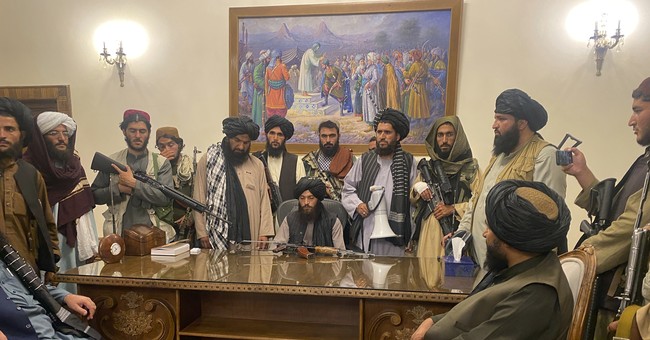 How is it that Democrats are so bad at this? Both Obama and Biden are dithering fools who have jeopardized American national security; Biden wasn’t even for the raid that killed Osama bin Laden. Biden has outdone his boss regarding Afghanistan. It’s a mess. It’s an exit that is a total trainwreck. No one can give straight answers concerning why this fell apart. The intelligence community, the Pentagon, and the White House are all blaming each other. With all of the typical DC games, there are at least 10,000 Americans still trapped in Afghanistan. What’s the plan? I know we’re now staying until they’re all out—but what’s the plan other than trusting the Taliban to ensure no one gets hurt as we evacuate our citizens. It’s a strategy that’s bound to fall apart.

What happened here? I mean, did we not know that thousands of our citizens were still in the bloody country? Hamid Karzai Airport in Kabul is a nightmare. The Taliban are back in control. While Biden botched the exit, his former boss, Barack Obama, played a part, albeit in an indirect way, concerning the Taliban’s reconquest of the country.   Remember the five Taliban commanders that were released in exchange for Bowe Bergdahl? Yeah, he’s one of the key players now. He’s the man who was photographed in the presidential palace in Kabul. The man deemed too dangerous to release was then set free by Obama (via NY Post):

When President Barack Obama released five Taliban commanders from the Guantanamo Bay prison in exchange for an American deserter in 2014, he assured a wary public that the dangerous enemy combatants would be transferred to Qatar and kept from causing any trouble in Afghanistan.

In fact, they were left free to engineer Sunday’s sacking of Kabul.

Soon after gaining their freedom, some of the notorious Taliban Five pledged to return to fight Americans in Afghanistan and made contacts with active Taliban militants there. But the Obama-Biden administration turned a blind eye to the disturbing intelligence reports, and it wasn’t long before the freed detainees used Qatar as a base to form a regime in exile.

Earlier this year, one of them, Khairullah Khairkhwa, actually sat across the table from President Biden’s envoy to Afghanistan, Zalmay Khalilzad, in Moscow, where Khairkhwa was part of the official Taliban delegation that negotiated the final terms of the US withdrawal. The retreat cleared a path for the Taliban to retake power after 20 years.

“I started jihad to remove foreign forces from my country and establish an Islamic government, and jihad will continue until we reach that goal through a political agreement,” Khairkhwa said at the summit.

The mastermind of the regime change is former detainee Khairkhwa, the Taliban mullah whom Obama released from Gitmo even though the Pentagon classified him as too dangerous to release.

Okay, maybe it’s a tad more direct, but it’s the Obama dividend in this sad saga for sure. Both Obama and Biden had issues with the military. They thought they knew better, but liberals never know better. Intelligence reports on the ground showed Afghanistan devolving into a dumpster fire throughout the summer. Joe ignored it. Actually, he straight up lied about it. It was your classic ‘screw it, let’s hope things don’t get crazy’ mindset that got us here. It’s because Joe can’t do the job. It’s because Joe has been wrong about American foreign policy for over 30 years.

The adults were back, I was told. If that means Democratic Party incompetence, then it’s come roaring back.