Disgraceful: Here's the Anti-Semitic Conspiracy Theory About the IDF and the Surfside Condo Collapse 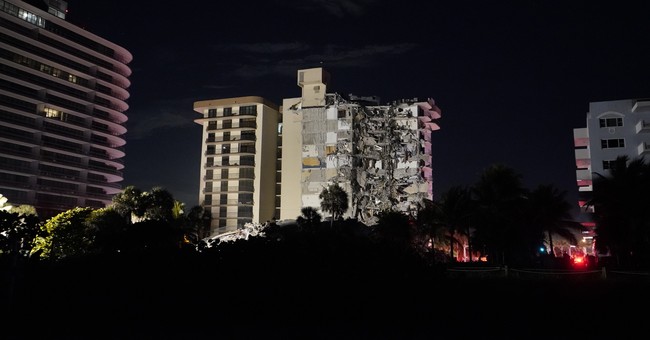 Not even a horrific tragedy can keep anti-Semitic nutjob theories from bubbling up. We all know about the horrific condominium collapse that occurred in Surfside, Florida in June. The death toll is over 40, with 100 still missing. Now, the state is being slammed by Tropical Storm Elsa which led to the relief workers demolishing the rest of the complex before it hit landfall. It was a controlled explosion. There’s nothing to it, but some people can find ways to hurl things that come way out of left field. It’s grotesque. Apparently, because some rescue workers from Israel’s defense forces have been helping, there are “questions” about this building being destroyed (via Jerusalem Post):

Eric Garland, a liberal political activist, took to Twitter on Monday to add fuel to the conspiracy theory fire. Garland responded to a tweet by Florida Senator Jason Pizzo, with a video of the demolition of the Surfside building.

He wrote to his over 250K followers, “Given the presence of Israeli Defense Forces in this mess, I have a lot of questions as to why this building was demolished in such a rush.”

The tweet received hundreds of retweets and over a thousand likes as well as many replies making assumptions about the IDF’s involvement.

Rafael Shimunov, a political activist from Queens, New York, also took to Twitter on Monday to voice his opinion about the IDF’s involvement.

Shimunov wrote: “I really don't understand the IDF's involvement in rescue attempts of people tragically crushed under buildings in Miami. Their expertise is crushing buildings with people in them, not rescuing them.”

Eric Garland with the antisemitic 9/11 truther-style conspiracy from the top rope. pic.twitter.com/8zbBmhucFr

Given the presence of Israeli Defense Forces in this mess, I have a lot of questions as to why this building was demolished in such a rush. https://t.co/a37SaRmYNY

This reads like an anti-Semitic conspiracy, if not at the very least an ill-considered thought. If you're going to put forward such questions, you really need to back it up with better facts and evidence as to why you're asking the question in this specific way.

Those people in #Surfside were just a few feet away from death, & now they've lost all of their possessions.@IDF flew in to help because they have a team that's experienced & travels the world to assist in tragedies.

Now, this isn’t the first time Eric Garland has doled out some nutty stuff. Sadly, it’s one of those situations where we should have expected this sort of bigotry to seep through once the IDF was on the ground. Israel has already taken it in the teeth over their latest military operation against Hamas’ rocket sites and an airstrike that took out a building containing media offices. The Associated Press cried foul, though the building housed Hamas intelligence offices.

In the meantime, workers are still sifting through the rubble trying to give closure to the scores of families of condo residents who remain unaccounted for—but hopes of rescuing survivors are pretty much non-existent at this point. They have been for some time, so I’m sure those who can watch this from afar will still peddle anti-Semitic nonsense. Everyone else is waiting to see if their loved ones have been recovered.