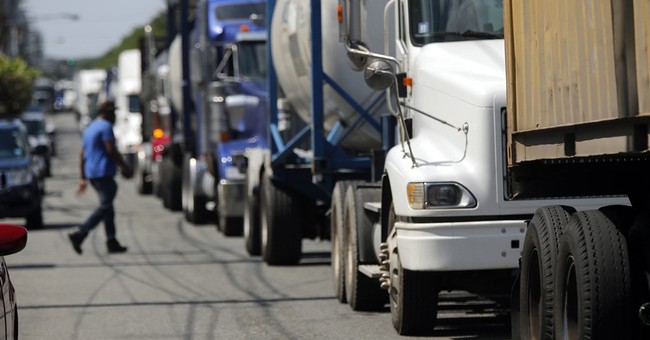 New Jersey is a deep blue state. It’s run by Democrats. It’s a sanctuary for illegals and yet they still find time to complain about stuff. Gov. Phil Murphy decided to allocate tens of millions of dollars to help these illegal aliens due to COVID, but that’s not enough, they say. To protest this gross injustice, they decided to block the New Jersey Turnpike at rush hour. It wasn’t a long demonstration. They fled before New Jersey State Troopers arrived on the scene, but the $40 million allocated was the reason for this man-mad woke traffic jam (via The Star-Ledger):

In a demonstration demanding more funds for undocumented immigrants in the state, protesters blocked a section of the New Jersey Turnpike for about 10 minutes Monday, slowing traffic during the evening commute.

A caravan of vehicles waving red flags stopped around 5:45 p.m. along the Turnpike’s northbound car lanes between Exits 12 and 13. Video footage from the scene showed people holding signs on the road and stopped traffic before state troopers arrived and ordered them back to their cars.

The group gathered at the Grover Cleveland Service Area in Middlesex County before heading out northbound on the highway around 5:15 p.m. The caravan was organized by Y Nosotros Que, a grassroots coalition of undocumented immigrants, excluded workers and immigrant advocates, along with other national groups like Cosecha Movement and National Day Laborer Organizing Network.

Gov. Phil Murphy last month announced $40 million would be allocated for undocumented immigrants and others who were unable to access pandemic economic relief funds. That pot of money, funded by the federal CARES Act, hasn’t been distributed yet.

Advocates argue the money will benefit less than 10% of the state’s 460,000 undocumented immigrants, who can claim a maximum of $2,000 per household if eligible. They’ve continued pressing the Legislature and Murphy, a self-declared progressive Democrat, for more funds — as much as $989 million to help all undocumented residents.

I mean, it really is something that some state budgets revolve around giving money to those who shouldn’t be here, but that’s the Democratic Party. That’s blue-state America. With Biden in the White House, the tough border enforcement era is over for now. Blue states can open the floodgates to these illegals, especially the criminal aliens, like murders, rapists, and child molesters, who apparently cannot be deported for some odd reason. Democrats refuse to back measures that get rid of these rotten apples. And people wonder why migrants are flocking here. Yes, it still revolves around those seeking a better life, but it also includes the bad hombres who are bringing crime with them. We have states that offer protection from deportation and benefits. Why wouldn’t you flock to these areas of sanctuary? This is part of the open border agenda that Republicans have yet to find an effective messaging mechanism, but that can wait. Right now, we need to get the border under control which won’t happen if Kamala Harris continues to have her head in the clouds and Joe Biden is asleep.